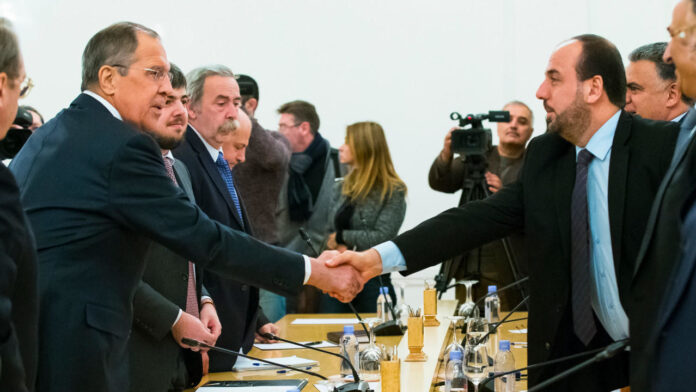 Ten years after the start of the conflict in Syria, the Syrian opposition has never succeeded in shaking President Bashar al-Assad’s regime. Marginalized by foreign sponsors, deceived by Damascus and divided in different directions, the opposition has consistently failed to exert any influence.

Involved in endless negotiations with the Syrian regime and marginalized by its own foreign sponsors focused on personal interests, Syrian opposition groups have never been able to bring Bashar al-Assad to his knees, ten years after the start of the conflict in Syria on March 15, 2011.

Although no one seems to be able to oust the Syrian president, the opposition in exile has also failed to meet some of the hopes or expectations of the mobilized population that has been fighting against his regime since March 2011.

The opposition never really came off the starting blocks. Since 2014, it has shifted to the background of Western attention after it became much less urgent to demand Assad’s resignation as the war became more complex and involved jihadist groups in Syria, such as the Islamic State (IS) group.

“Unfortunately, the Syrian opposition no longer has a say in Syria, because they no longer have any influence and do not pose a credible threat to the Assad regime,” said Ziad Majed, a professor at the American University of Paris and one of the authors of “Dance. la tête de Bachar al-Assad “(inside the head of Bashar al-Assad), speaks with FRANCE 24.

Lack of representativeness and leadership

“The political opposition does not represent the people and has never managed to organize itself properly or unite to influence the course of events over the last ten years,” agrees Antoine Mariotti, journalist at Jowharand author of “La Honte de l’Occident – Les Coulisses du fiasco syria “(Western shame – behind the scenes of the Syrian fiasco).

When the Syrian people arose in opposition to the Assad regime in March 2011, they demanded a structured opposition to represent them. The people have been left seriously disappointed, says Majed.

“From 2012, intellectuals who opposed the Assad regime and Syrian revolutionary activists stopped recognizing the official opposition in exile,” he said. As a result of the regime’s barbaric repression of these intellectuals, they believed that their priority was still to take down Assad and therefore preferred to refrain from participating in a struggle for legitimacy against the opposition.

In contrast to what happened to Yasser Arafat in Palestine and Nelson Mandela in South Africa, no one has successfully established himself as a viable leader of the Syrian opposition, Majed argues. “The regime is very aware of the importance of this, it realized from the outset that it was crucial to prevent the emergence of a credible opposition leader, by eliminating all those who had the potential to play such a role in the country,” he said. says.

Majed uses the examples of the assassination of Mechaal Tamo, a Kurdish politician heavily involved in the Syrian revolution, as well as a series of forced disappearances of potential leaders who began appearing in the peaceful mobilization against the regime, such as Ghiyath Matar and Yahya Charbaji, or the forced disappearance 2013 by the opponent Fayek al-Mir, a figure of the secular left.

“Other opponents have disappeared by force, such as lawyer Razan Zeitouneh and her companions, as they traveled through an area controlled by armed opposition movements,” he recalled, referring to the internal frictions in the anti-Assad camp. On the other hand, due to their severe repression, other opponents have been forced to leave the country and work in exile abroad, which has diminished their influence on the ground in Syria over time.

Some opposition members tried to assert their role as leaders at the expense of their rivals, even though they had not set foot in their country for a long time due to continuous repression, Mariotti said. “Isolated, without solid teams on the ground, they were in a way disconnected from Syria in 2011. This meant that this opposition in exile, vulnerable to foreign influences, has never succeeded in imposing the national landscape, nor has it been able to control the rebel groups’ military. field operations. “

“One should also remember the key role played by the unfulfilled promises and delays of the Western powers,” says Mariotti.

>> After a decade of war, Assad’s presidency is intact but under supervision

In August 2012, US President Barack Obama was asked what could lead him to use military force in Syria. “We have been very clear to the Assad regime,” he said, “that a red line for us is that we are beginning to see a whole lot of chemical weapons moving or being used. That would change my calculation. Obama said crossing it would have “enormous consequences.” Yet, after its long wars in Iraq and Afghanistan, the United States had been reluctant to intervene in a new Middle East conflict – the red line remained, apparently, as nothing more than an empty threat.

“This type of Western retreat has served to discredit the opposition and has shot a number of opponents who are disappointed in the West into the arms of Islamist groups,” Mariotti said.

An opposition marginalized by its own foreign sponsors

The fracturing of the official opposition, which at the end of 2012 was recognized as the “sole representative of the Syrian people” by more than a hundred countries, has benefited four major international actors: Russia, Iran, Turkey and the United States. They control either territory in Syrian territory directly or through their allies.

“The issue became more complex as the conflict developed and was no longer just about Syrian protagonists who wanted to change a regime that had existed since 1970, as was the case at the beginning of the revolution,” Majed said.

“Despite opposing feedback from foreign intelligence services in 2011, everyone was wrongly convinced that Assad would be led in a few months and the opposition would quickly take control,” Mariotti said. “This perspective aroused the appetite of some countries in the region looking for places to dominate, countries such as Turkey and some Gulf states, which initially sponsored and then elected opposition groups to advance their own agendas to the detriment of the Syrian people’s hopes for their future. ”

At the end of 2015, the UN Security Council unanimously adopted Resolution 2254, which provided that a UN-facilitated, Syrian-led political process “within six months” would establish “credible, inclusive and non-sectarian governance” and set a timetable and methods for a new constitution. Under the new constitution, “free and fair” elections should be held “within 18 months” under UN supervision.

The talks have, however, remained in a dead end for some time, paralyzed by disputes between Iran and Turkey. Attempts to join forces to form a single delegation for negotiations have also yielded no results.

“In reality, in the face of a divided opposition, the regime simply pretended to take into account the demands of the UN and made it look as if it was willing to play the negotiating game, knowing that it was protected by both its Russian and Iranian allies,” he said. . Mariotti.

“A new type of opposition”

According to Majed, ten years after the 2011 uprising, “only what has emerged from the rubble of Syria and in the countries in exile remains, that is, a certain Syrian civil society and a new type of opposition, which can be seen through the trials currently taking place in Germany and which will be launched in several European countries with regard to crimes against humanity committed by the regime ‘.

On February 24, the High Regional Court of Justice in Koblenz, Germany, sentenced Eyad al-Gharib, a member of the Syrian intelligence service, to four and a half years in prison for “complicity in crimes against humanity”. The trial was the first in the world to externally review abuses attributed to the Assad regime.

“Although it has no illusions about its ability to change the regime in Syria, this civil society against the voice of Damascus is being heard in an international legal battle, as well as in research and intellectual production aimed at preserving the memory of the 2011 revolution,” says Majed.

“For them, it is a matter of winning the narrative war against the regime and preventing the normalization of Assad and his regime in the name of realpolitik, so as not to allow his crimes to go unpunished.”