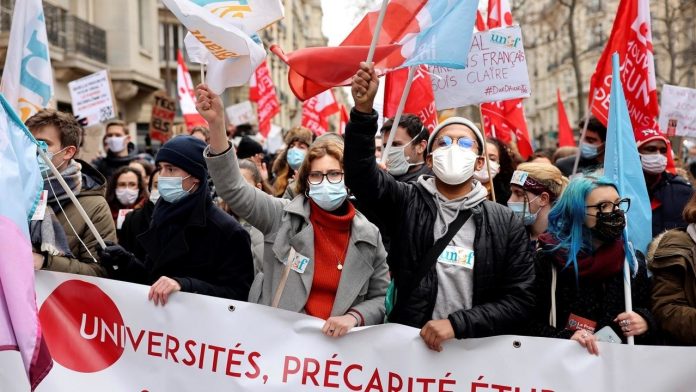 French schoolteachers and university students staged nationwide strikes and protests on Tuesday as they rallied to demand more government support in the midst of the pandemic.

“No virus protocol, no school!” read posters worn by schoolteachers and demand better virus protection in their schools, which have remained open since September in view of concerns about learning gaps and to alleviate the burden on working parents.

“Sick of zoom!” shouted university students, frustrated that they have been expelled from campus since October.

Aside from the fear of viruses, the common problem at Tuesday’s protests in Paris, Marseille and other cities around France was economic.

Teachers’ associations, which negotiate with the government about improved conditions, want higher salaries and that the government employs more teachers after years of cost reductions.

At a meeting in the western city of Rennes, Axel Benoist, head of the Snuep-FSU union, said that teachers had lost “an average of 275 euros a month in purchasing power over the past decade”.

Other protesters stressed the need to hire more teachers and felt that colleagues were rarely replaced when they became ill.

The Ministry of Education said about 12% of teachers across the country took part in Tuesday’s strike, although unions said the figure was higher.

Meanwhile, students are seeking more financial support from the state and want to draw attention to emotional problems among young people who are separated from friends, professors and job opportunities in the midst of the pandemic.

With French universities in limbo among the recent recurrence of Covid-19 infections, alarm bells are ringing over the social, psychological and academic consequences of months of lockdowns, curfews and online tuition for students housed in cramped housing that many can afford.

>> When students despair, France addresses the situation of the “lost generation” of the pandemic

Macron also said he would ensure that all students have access to meals for one euro twice a day at the university’s cafeterias, as well as free psychological support.

At the same time as they welcome the measures, the student associations want more financial support and return to the rotating system that existed before the country’s second nationwide lockdown, where students switched between online and classroom teaching.

UNEF, the country’s largest student union, has called for a crisis plan of 1.5 billion euros to increase grants and help students pay for housing.