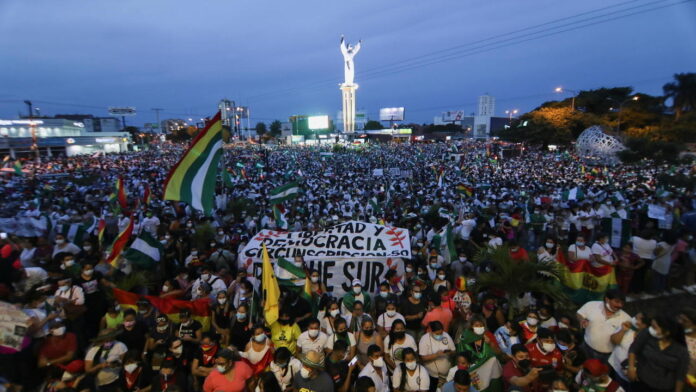 Tens of thousands of Bolivians responded to an opposition call on Monday for protests against the arrest and detention of former President Jeanine Anez on charges of leading a coup against his socialist predecessor Evo Morales.

Conservative Anez, 53, was detained on Sunday after she was arrested on charges of terrorism, insurgency and conspiracy.

“It was not a coup. It was a fraud,” read a banner held by one of the protesters who defied the dangers of the coronavirus pandemic to take part in marches, sit before prosecutors and peaceful rallies in the capital La Paz and in the cities of Cochabamba, Sucre. Trinidad and Santa Cruz.

In Santa Cruz, the country’s economic capital, about 40,000 people gathered on Christ-Redeemer Square, which has only been the site of right-wing demonstrations in the past.

The arrest led to a reprimand from the Organization of American States (OAS), which on Monday expressed “concern over the misuse of legal mechanisms that have once again turned into instruments of repression by the ruling party.”

“The Bolivian judiciary is not in a position to provide the slightest guarantee of a fair trial,” Ouis Secretary-General Luis Almagro said in a statement.

It called for “liberation for all who are held in this context, until impartial processes and mechanisms can be put in place to determine responsibilities.”

The Peruvian government reported that one of Anez’s former ministers, Roxana Lizarraga, had asked for asylum in the country.

After her arrest, Anez tweeted on Sunday: “They are sending me into custody for four months to wait for a trial for a ‘coup’ that never happened.”

In an AFP indictment, prosecutors had originally asked that Anez and two ministers in her year-long guard government be held for six months as a “precautionary measure”.

Anez came to power in November 2019 after Morales and several leading allies in his Movement for Socialism (MAS) party resigned after weeks of protests during his controversial re-election to an unconstitutional fourth term.

When Morales fled into exile, Anez was the top parliamentarian on the left and was sworn in by Congress as interim president despite a lack of quorum, with many MAS lawmakers boycotting the session.

Morales and his MAS allies then claimed to have been victims of a coup.

In an interview at the time, Almagro claimed that Morales’ only coup was to manipulate the various branches of government to allow him to run for a fourth consecutive term as president of a country whose constitution limits leaders to two consecutive terms.

The presidency is now back in the hands of MAS since Luis Arce won last year’s general election.

Anez says she is a victim of political persecution, while the UN, the European Union and the United States have demanded that fair processes be respected.

The US government said on Monday that it “followed with concern the developments surrounding the Bolivian government’s recently arrested former officials.”

Carlos Mesa, a former Bolivian president, took to Twitter to describe Anez’s detention as “arbitrary, illegal and a violation of her human rights.”

Anez has sent letters to the EU and the OAS asking them to send observers to Bolivia.

Morales, the country’s first domestic head of state, was himself the target of insurgency and terrorism charges in an investigation launched shortly after Anez took power.

But he returned from exile in November last year after Arce’s landslide victory in the October election.

After his resignation, Morales branded Anez as “a coup-right senator.”

He said Anez had “declared himself … interim president without any legislative decision-making, surrounded by a group of accomplices.”

Last month, Congress voted to grant amnesty to those charged during the Anez presidency for acts of violence during the chaos that followed Morale’s resignation.

The 17-page indictment states that the arrests were part of an investigation into a conspiracy to carry out an “alleged coup” beginning three days after the 2019 election.

The document lists Anez and five former ministers, as well as police and military chiefs.

On Sunday, right-wing civil activist Yassir Molina was also arrested, as the government led a group that took part in the protests against Morales in 2019.

Justice Minister Ivan Lima insisted on Saturday that the judicial system was independent of the government.