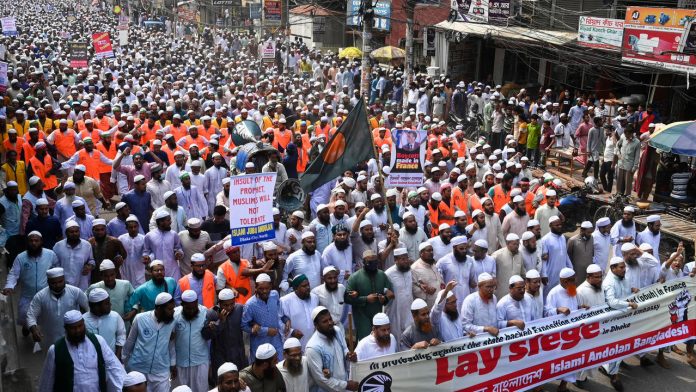 Tens of thousands of protesters marched through Bangladesh’s capital on Tuesday, calling for a boycott of French products and burning a picture of President Emmanuel Macron after he defended cartoons depicting the Prophet Mohammed.

Police estimated that more than 40,000 people took part in the march organized by an Islamist party, which was stopped before it could get close to the French embassy in Dhaka.

Hundreds of officers used a barbed wire barricade to stop the protesters who broke up without violence.

The French leader has been the target of protests in several countries over his comments made after a teacher was beheaded for showing the cartoons to his students.

The rally was organized by Islami Andolon Bangladesh (IAB), one of the country’s largest Islamist parties, and started in Bangladesh’s largest mosque.

Protesters shouted “Boycott French products” and called for Macron to be punished.

“Macron is one of the few leaders who worship Satan,” Ataur Rahman, a senior Islami Andolon member, told the demonstration at the Baitul Mukarram National Mosque.

Rahman called on the Bangladeshi government to “kick” the French ambassador, while another leader, Hasan Jamal, said activists would “demolish every brick in the building” if the broadcast was not ordered out.

“France is the enemy of the Muslims. Those who represent them are also our enemies,” said Nesar Uddin, a young leader of the group.

Even after the meeting was stopped, protesters marched down other streets shouting “Boycott France” and “Macron will pay a high price”.

The French president’s comments on Islam have already led to a diplomatic showdown with Turkey. Macron said the schoolteacher “was killed because Islamists want our future”.