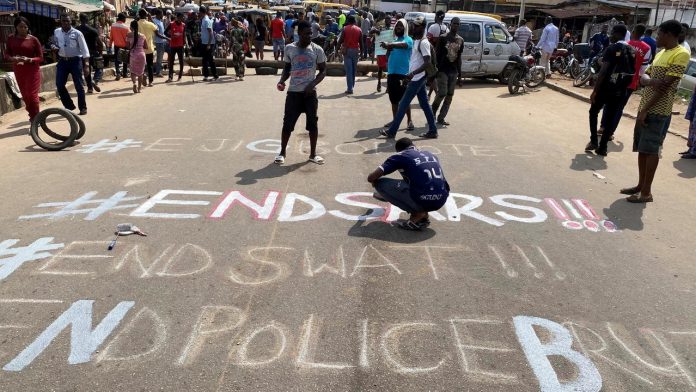 Nigerian authorities said on Tuesday that nearly 2,000 inmates had broken out of jail after crowds attacked two prisons, while officials announced a 24-hour curfew in Lagos’ large capacity in an attempt to quell the unrest following two weeks of protests against police brutality.

The Inspector General of Police deployed anti-riot police across Africa’s most populous nation and ordered forces to strengthen security around Nigerian prison facilities.

“The force will in future exercise the full powers of the law to prevent any further attempt on the lives and property of citizens,” reads a police statement.

Interior Ministry spokesman Mohammed Manga said armed crowds had attacked two prison facilities and subjected the guards on duty. At the last count, 1,993 inmates were missing, he said Tuesday. It was unclear what the exact population of the prisons had been before the attack.

“Most of the detainees held in the centers are convicted criminals who are serving sentences for various criminal acts, awaiting execution or trial for violent crimes,” he said in a statement.

Lagos State Governor Babajide Sanwo-Olu warned on Twitter that the protests against police brutality in Nigeria have “degenerated into a monster that threatens the well-being of our society” when he announced a 24-hour curfew in megacity.

He said the curfew would cover the entire city with about 14 million people and surrounding areas. The announcement came after a police station was burned down in the city and two people were shot by police.

Following the announcement of the curfew, protests continued Tuesday in many cities, including Abuja, the capital, where troops are deployed.

In Lagos, protesters gathered in the city center were dispersed by gunfire, according to four witnesses speaking to AFP. It was unclear who shot at the protesters, but hundreds of people were present at the site, which has become the epicenter of widespread demonstrations.

Authorities had also imposed a curfew in Benin City on Monday after prisons were attacked.

The protests began two weeks ago after a video circulated in which a man was beaten, apparently by police officers from the Special Anti-Robbery Squad (SARS).

SARS strengthens the charge of abuse for years

Young protesters marched in cities across Nigeria under the banner #EndSARS. In response, the government announced that it would ban the anti-robber group, which for years has been accused by human rights groups of widespread abuses, including torture and murder.

Demonstrators have been dissatisfied with the dissolution of the SARS unit and demand an end to human rights violations and respect for all parts of the police force. The protests have stopped traffic in Lagos, Abuja and many other major cities in the country with 196 million people.