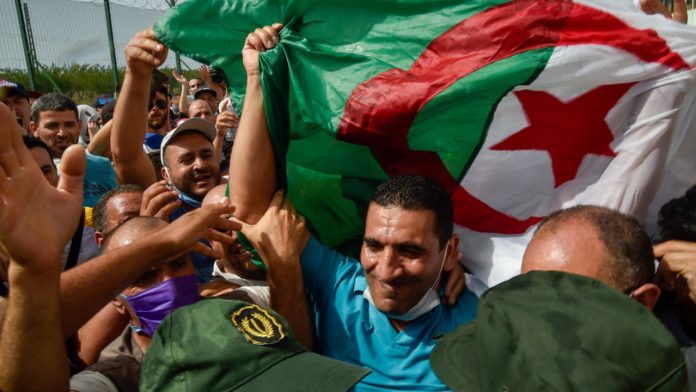 Algerian opposition activist Karim Tabbou, a key figure in anti-government protests last year, was sentenced to a year in prison on Monday for “undermining national security,” said one of his lawyers.

A court in Kolea, near Algiers, also ordered Tabbou to pay a fine of 100,000 dinars (637 euros) for the same fee, but it cleared him of “damaging army morale”, Nassima Rezazgui told AFP.

Tabbou was one of the most famous figures at mass demonstrations that erupted early last year in protest of longtime President Abdelaziz Bouteflika’s bid for a fifth term.

The rallies led by the Hirak movement continued well beyond Bouteflika’s departure in April 2019 and were not suspended until the coronavirus pandemic struck.

Tabbou had not been in custody for the trial, and he is still free.

“I am hurt to hear these accusations of harming the morale of the troops and attacking national unity,” Tabbou said during his trial, according to Algerian reports.

He said he had “learned politics from people like Hocine Ait Ahmed”, a veteran of Algeria’s independence struggle who later became a left-wing opposition figure.

The prosecutor had applied for three years in prison and a fine of 100,000 dinars.

In a separate case, Tabbou was sentenced on appeal on March 24 to one year in prison, also on charges of “undermining national security”, a sentence he has already served including time in custody during the trial.

“It’s really unfortunate to convict a person twice on the same charge,” Rezazgui said. “It is against the law. Our struggle continues for the rule of law.”

Tabbou had been released on a temporary basis in July by order of Bouteflika’s successor, President Abdelmadjid Tebboune, a move that is seen as aimed at calming the Hirak.

But Tabbou was arrested again on September 26.

He is the leader of a small, unregistered opposition party, the Democratic Social Union (UDS).

In a Facebook post, activist Macron accused of “political hypocrisy” in support of “an arrogant regime that imprisones journalists, violates public freedoms and exposes the judiciary to its dictates.”

The 47-year-old is one of a number of pro-Hirak figures who have been arrested in an ongoing operation.

The prisoners’ rights group CNLD says that about 90 activists, users of social media and journalists are currently in custody, mainly for Facebook posts.

His trial had been postponed several times due to the coronavirus pandemic.