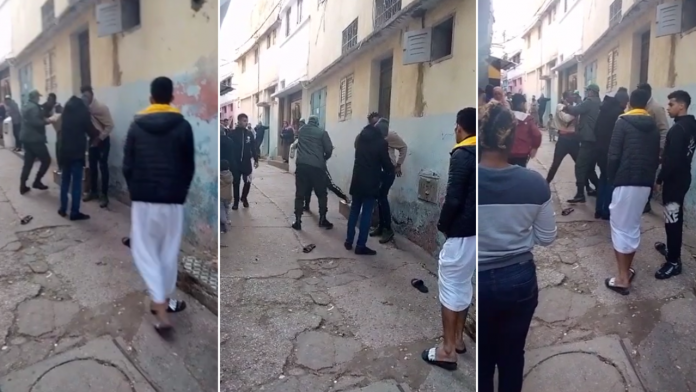 The video, filmed on January 28, shows two black men lined up against a wall in Rabat, Morocco, when police search for them. A fight then breaks out between one of the men and an officer. Both men, who are immigrants from sub-Saharan Africa, are arrested and taken away. According to their friend, who shared this video with the JowharObserver team, they have not seen it since. In many cities in northern Morocco – especially Rabat – the police regularly arrest migrants from sub-Saharan Africa and move them as far as possible from the Spanish border.

These arrests are often violent according to the Moroccan Human Rights Association (AMDH). In Rabat, the police carry out most of these arrests in working-class areas with large communities from sub-Saharan Africa, especially in the Takadoum, Massira and Yakoub El Mansour districts.

This video showing migrants arrested was filmed on January 28 in Rabat. It was shared with our team by our Observer Eric (not his real name).

Eric (not his real name) is a migrant living in the Takadoum district. He says he is afraid that his two friends, whose arrests are shown in this video, were driven to the city of Oujda, on the border with Algeria, or worse, imprisoned.

This type of arrest is practically a daily occurrence in Morocco. The incident took place around 5pm on January 28 near 6, rue Bizanta in the Takadoum district. It was a neighbor woman, who also comes from sub-Saharan Africa, who filmed the video.

A group of us – four friends – were together when we suddenly met two officers from the relief force [Editor’s note: a special security service that supports the work of Moroccan police and gendarmes]. I managed to escape with my friend. But the other two, Salif and Moussa [not their real names] failed to escape and was arrested.

I have not received a word from my friends since they were arrested. I have not been able to reach them by phone.

I do not know if they were transported to the Algerian border or imprisoned, because it was a quarrel with one of the police.

JowharObservers tried to contact the Rabat police to find out what happened to the two men who were arrested. We will update this page if we receive a response.

‘They often suffer racist insults and abuse and get their belongings – like phones and money – from them.’ The Moroccan human rights organization AMDH also shared the video of the arrest on social media. Omar Nadji, vice president of the Nador sector (a city in northeastern Morocco), has spoken out against these arbitrary arrests.

There have been no recent mass arrests of migrants. However, daily arrests have been made, especially in Rabat. People from sub-Saharan Africa are often arrested for no reason on the street without having done anything, which is unacceptable.

What happens is that the authorities try to move immigrants away from northern regions to prevent them from trying to reach Spain by boat or climb up the fence to enter the Spanish enclaves of Ceuta and Melilla. The migrants are loaded into buses and taken to cities in the center of the country, such as Beni Mellal or Marrakesh.

They often suffer racist insults and abuse and get their belongings – such as telephones and money – from them.

Some migrants have also been taken to the city of Tiouli, located on the Algerian border, about 50 kilometers from Oujda. There, migrants are forced to cross the border into Algeria. In this case, they often stay in Algeria for a few months to work and save money before returning to Morocco.

Thousands of migrants travel through Morocco before attempting to reach Europe through the Spanish enclaves of Ceuta and Melilla, or more recently through the Canary Islands.

Many say they are victims of racism and police violence in Morocco. Apart from Rabat, Moroccan police also regularly carry out races in the forests near Tangier, where many migrants live hidden before attempting to cross the Strait of Gibraltar to reach Spain.

In July 2020, a man from Cameroon was killed when the police dismantled an illegal camp site in a forest north of Tangier.