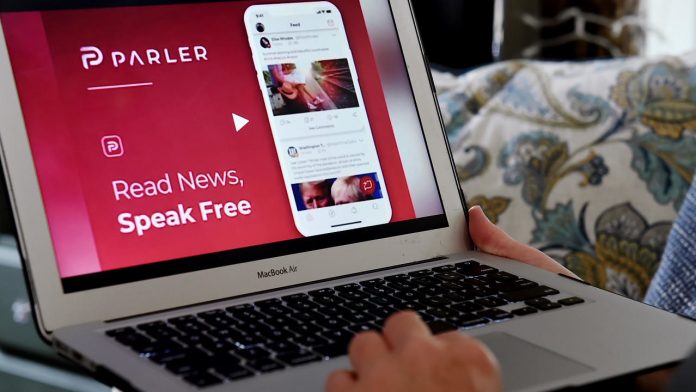 The social platform Parler sued Amazon on Monday after the technology giant’s web department forced the conservative network offline in order not to force incentives for violence.

The trial comes amid a wave of actions by online giants abolishing access to supporters of President Donald Trump in the wake of last week’s US Capitol riots and alleged plans for new violent demonstrations.

The site’s popularity increased in recent weeks and became the leading free app in the Apple App Store after the much larger Twitter banned Trump from its platform for its role in the January 6 riot.

Announcements of support for Wednesday’s attack in Washington DC – along with talks about new demonstrations – had flourished on the platform, leading to Google removing it from its app store on Friday, followed by Apple on Saturday.

Amazon then confirmed that it would discontinue the platform from its cloud services to allow “threats of violence.”

In a letter to Parler’s owner, the web giant said it would discontinue the service at 23.59 on Sunday (0759 GMT Monday).

The tracking site down for all or just me showed Parler offline just after midnight, indicating that its owner has not been able to find a new web hosting partner.

Parler CEO announces that the entire system has been shut down, no vendors will touch them and it will be offline for the foreseeable future. pic.twitter.com/gQKsKWX9GR

In a series of posts on Parler on Saturday, CEO John Matze said the site would crash the next day, accusing tech giants of a “war on free speech.”

“They will NOT win! We are the world’s last hope for freedom of speech and information,” he said.

Teams for themselves? Social media is blocking Trump among talks to regulate Big Tech

In its early days, the platform attracted a lot of ultra-conservative or even far-right users.

But it now attracts many more traditional Republican voices.

Trump is not known for having a Parler profile.

Parlor’s latest growth was overloaded after last week’s violence in DC when new users, furious over Twitter’s ban on Trump, flocked to the app and demanded new protests.

In a now deleted post, an account claiming to belong to Lin Wood, a lawyer for Trump, called for Vice President Mike Pence to face a firing squad – threats that US media have reported led to a secret service investigation.