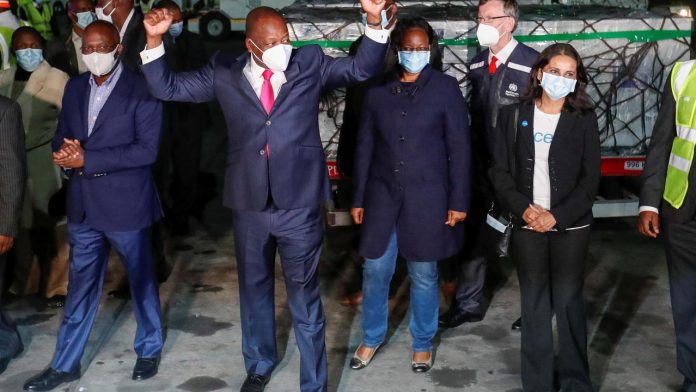 Millions of coronavirus shots from the global Covax system arrived in Nigeria, DR Congo and Angola on Tuesday, as African countries increased their vaccine deployments.

Last week, Ghana and Côte d’Ivoire were the first African countries to receive vaccines from Covax, which aims to deliver two billion doses by the end of the year.

Richer countries have advanced with vaccinations, but many poorer countries are waiting for supplies, prompting the World Health Organization (WHO) to warn that the crisis may not end unless everyone can inoculate their populations.

The Covax facility, which is run by the WHO together with health associations, aims to deliver vaccines to dozens of countries during the first 100 days of 2021 and two billion doses by the end of the year.

However, there are still critical barriers to expansion in large African countries with sketchy infrastructure and a range of security challenges – a point raised by Faisal Shuaib, head of Nigeria’s Primary Care Bureau.

“States without a functional airport will have their vaccines transported by road using vans with built-in cold cabins, from the nearest airport,” he said.

He called the delivery – which arrived at noon in the capital Abuja – a “good day for Nigeria” and promised that the launch would begin in earnest on Friday with frontline health workers as the first to be vaccinated.

Nigerian official Boss Mustapha called on traditional rulers, religious leaders, civil society groups and the media to spread the message that vaccinations are needed, adding: “This is a struggle for all.”

Democratic Republic of Congo Health Minister Eteni Longondo said in Kinshasa: “We have ordered about six million doses. Today we got I think 1.7 million.”

He said the first shipment would be used to vaccinate “health workers, those over 55 and people with comorbidities such as diabetes and high blood pressure,” adding that the launch would begin in full force next week.

In Angola, where some health workers were vaccinated shortly after the doses were released, WHO’s Djamila Cabral said the vaccines came with “a stronger hope of saving lives”, but warned that everyone must continue to respect Covid’s restrictions on beating pandemic.

The nearly four million AstraZeneca / Oxford doses received by Nigeria, made by the Serum Institute of India, are the first of 16 million shots that Covax plans to deliver in the coming months to the country of 200 million.

The government said it hoped to vaccinate at least 70 percent of its adult population over the next two years, and health officials said more than two million people had already signed up for jab online.

“Because the vaccines come in batches due to limited supply, we will inform Nigerians about who and where to receive the vaccine,” Shuaib told reporters.

Nigeria, DR Congo and Angola between them have registered fewer than 4,000 deaths from about 210,000 since the pandemic began – although official figures in most countries are considered underestimated.

A new virus variant has also been discovered in Nigeria, but researchers have not yet decided whether it is more contagious or more deadly than the original strain.

Covax, an initiative led by Gavi the Vaccine Alliance, WHO and the Coalition for Epidemic Preparedness Innovations (CEPI) with UNICEF as its implementation partner, aims to deliver 237 million AstraZeneca doses by the end of May.