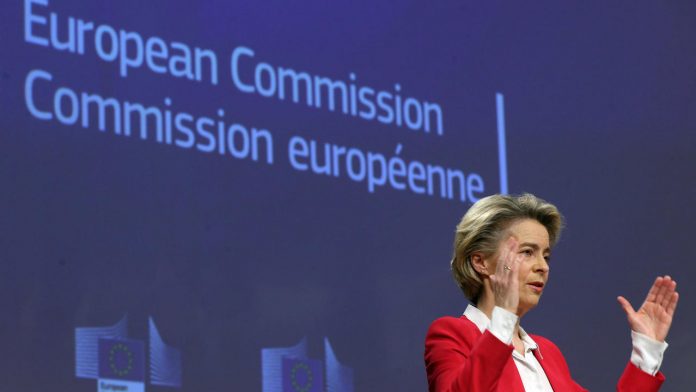 Authorities in the EU and the UK increased Covid-19 vaccine announcements on Friday as they sought to dampen criticism of the slow pace of jabs amid stubbornly high infection rates.

European Commission President Ursula von der Leyen said an existing deal with BioNTech / Pfizer has been extended to double the number of doses delivered to the block to 600 million.

The European Medicines Agency also agreed to squeeze out six doses from each BioNTech / Pfizer vial instead of five, potentially increasing the number of injections offered by 20 percent.

At the same time, BioNTech said early data showed that its product was effective against coronavirus variants that dominate the UK and South Africa, which are believed to be highly contagious.

In the UK – Europe’s worst-hit country after Russia – the Modern vaccine was added to the vaccination along with the already approved BioNTech / Pfizer and Oxford / AstraZeneca.

Von der Leyen acknowledged an “uneven path” at the start of the vaccine rollout in the EU’s 27 countries and spoke of more “difficult months” ahead to get it on the right track.

But overall, she insisted that her commission’s strategy of collecting orders last year for half a dozen vaccines that had not been tested at the time had been the right one, done in the teeth of fierce global competition.

As a result, there were enough doses secured by the two vaccines currently approved in the block, those from BioNTech / Pfizer and Moderna, “to vaccinate 380 million Europeans, and this is more than 80% of the European population”, she said .

And, she added, if all other vaccine candidates are also approved, the bloc could eventually have 2.3 billion doses on hand – enough for all EU citizens, with extra for the union’s poorer neighbors.

The other candidate vaccines are from Oxford / AstraZeneca, Johnson & Johnson, Sanofi / GSK and Curevac. Negotiations are underway for one from Novavax.

The European Medicines Agency said a decision approving the Oxford / AstraZeneca vaccine could be taken by the end of this month.

But right now, the EU has only 75 million doses of the BioNTech / Pfizer vaccine, while the rest will start to be delivered sometime between April and June. Approval for the 160 million doses from Moderna was given on Wednesday.

The deal extension is for a fixed 200 million extra doses plus an option for 100 million more.

In comparison, the USA has secured a total of 200 million doses from BioNTech / Pfizer and the same amount of Moderna vaccine doses.

>> Faster than France, but fast enough? A look at Germany’s rollout of vaccines

The German Ministry of Health said it has purchased an option for an additional 30 million doses directly from BioNTech / Pfizer and 20 million from Curevac and is negotiating with Moderna.

Her spokesman Eric Mamer repeatedly avoided questions about the apparent intrusion of Berlin and told reporters: “We will certainly not discuss any possible legal steps or anything.”

And later Friday, the French presidency said that President Emmanuel Macron, German Chancellor Angela Merkel and von der Leyen had promised that they were “determined to continue” the EU’s collective strategy to buy vaccines.

Britain at the breaking point

Britain, no longer an EU member, started its vaccination program long before the European Union. However, there was skepticism that it would reach its goal of inoculating 15 million people by mid-February.

Its announcement of the Moderna vaccine on Friday meant that 17 million doses of this jab would be delivered in the coming months.

But the country is in “a sprint”, Prime Minister Boris Johnson has said. Hospitals in England are at the breaking point of soaring Covid-19 infections.

Both BioNTech / Pfizer and Modern Vaccines use a technology called messenger RNA, or mRNA. Unlike traditional vaccines that inject an inactivated virus, they teach the body’s cells how to make nail proteins to build defenses.

However, they are logistically very challenging because they must be kept in subarctic temperatures with the exception of limited periods of transport and storage just before use.