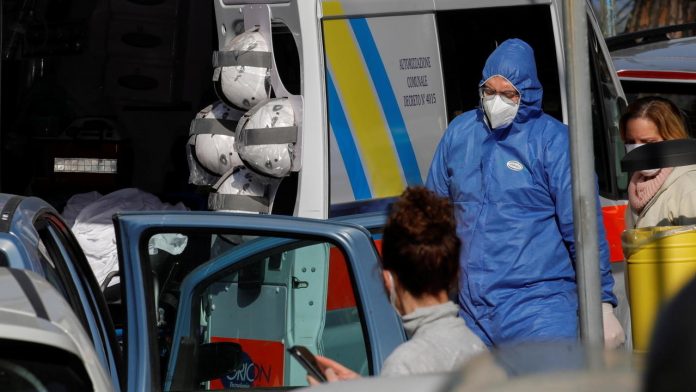 The European Union expressed hope on Wednesday that it could start vaccinating people against the new coronavirus as early as next year, as Italy registered more than a million cases and Britain said its death toll had exceeded the 50,000 mark.

The head of the European Center for Disease Prevention and Control (ECDC), Andrea Ammon, told AFP that a vaccination program could be started “optimistically (during the first quarter) next year, but I can not be more precise,” trials in both the US and Russia suggested that vaccines currently in the final stages of testing have so far proved to be very effective.

A vaccine is seen as the best chance to break the cycle of deadly viral rivers and severe restrictions over large parts of the world since Covid-19 first emerged in China late last year and was ballooned into a pandemic.

So the announcement by the American pharmaceutical giant Pfizer on Monday that a vaccine it is developing with Germany’s BioNTech is 90 percent effective has triggered a wave of optimism around the world that the pandemic may soon be controlled.

And the news on Wednesday that Russia’s own Sputnik V vaccine was 92 percent effective drove another rally in the world’s stock markets.

Yet the glimmer of hope is not enough to obscure the gloomy statistics that are still being recorded around the world.

In Italy, the number of confirmed cases of coronavirus crossed the symbolic million mark, while almost 43,000 people have died, official data showed.

‘Not out of the woods’

In the UK, the death toll exceeded 50,000 after a further 595 deaths were recorded in the last 24 hours, government data showed.

“Every death is a tragedy … we are not in the woods yet,” said Prime Minister Boris Johnson.

And in Spain, the number of deaths increased over 40,000 with infections exceeding 1.4 million, as the number of new cases continued to grow, according to data from the Ministry of Health.

In Gibraltar, an elderly woman living in a nursing home became the first person to die of Covid-19 there, the government said.

According to the World Health Organization, 42 “candidate vaccines” are currently undergoing clinical trials, up from 11 in mid-June.

In August, Russia became the first country to register a vaccine, but did so in the face of extensive clinical trials that are still ongoing.

For Sputnik V, about 40,000 volunteers at 29 medical centers participate in the third and final test phase, and foreign trials are also taking place in the United Arab Emirates, Venezuela, Belarus and other countries.

Russia promised that the interim research papers would be published in one of the world’s “leading peer-reviewed medical academic journals”.

But even when a vaccine is finally launched, it will not necessarily mark the end of the pandemic, many observers warn.

“The recovery may not be linear, but rather unstable, stop-start and dependent on the pace of vaccine rollout,” warned European Central Bank Governor Christine Lagarde.

“We can still face recurring cycles of accelerating virus spread and tightening restrictions until widespread immunity is achieved,” she told a central bank virtual forum.

The case is also high in the United States – a record 200,000 new infections were registered on Tuesday and another 1,535 people lost their lives in 24 hours.

The virus also reaches the farthest corners of the earth, with the small Pacific state of Vanuatu reporting its first case and ending its status as one of the few remaining virus-free countries.

And in Europe, which has suffered more than 317,525 deaths from 13,339,600 infections, many countries are struggling with a growing second wave.

Greece, which is already locked, announced on Wednesday that a curfew would also take effect from Friday in an attempt to limit the spread of the virus and alleviate the pressure on its attached hospitals.

Sweden, which has so far refused to follow the path of most other countries when it comes to introducing mandatory barriers, turned up the rhetoric on Wednesday to try to persuade people to take the situation seriously.

In Ukraine, however, nearly 2,000 people in Kiev protested against possible weekend restrictions that officials say could take effect to slow the spread of the virus there.

The European Commission announced on Wednesday that it intended to build a new agency to prepare for similar crises in the future.

While health policy is mainly the responsibility of the bloc’s 27 member states, EU Health Commissioner Stella Kyriakides said the coronavirus pandemic had shown the need for coordination.

On Tuesday, the European Parliament and its member states reached an agreement on managing the bloc’s multiannual budget by blocking € 750 billion ($ 886 billion) in coronavirus viruses.