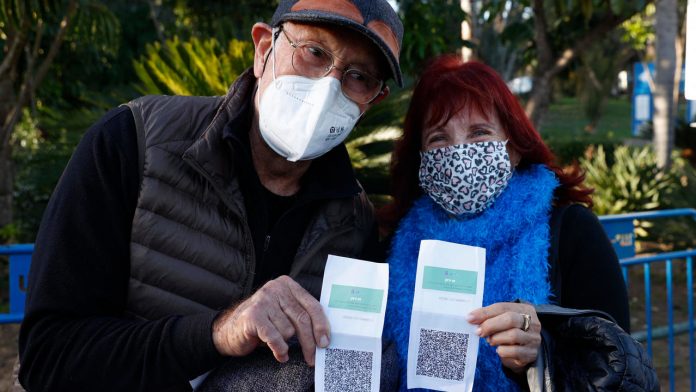 The European Commission will present a proposal in March to create an EU-wide digital vaccination passport, an issue that has divided Member States, said Commissioner Ursula von der Leyen on Monday.

“We will present a legislative proposal in March,” von der Leyen told German conservative lawmakers during a video conference on Monday.

With vaccinations now well under way, governments are increasingly seeing vaccine “passports” – or other forms of Covid-19 status certificates – as a way out of the shutdown cycles and curfews that have ground travel almost to a halt.

The certificates would enable people to show proof of vaccination and thus skip quarantine protocols when they arrive in a new country.

Greece presented a digital vaccination certificate in February to those who have received two doses of the vaccine.

But some countries, including France and Germany, have expressed concern that easier travel for people who have been vaccinated would discriminate against others who are still waiting.

French Health Minister Olivier Véran has repeatedly said it is too early to discuss vaccination passes because fewer than three million French people have received a first dose and because it is still unclear whether the vaccine prevents transmission.

This is a view shared by the World Health Organization (WHO).

The European Commission has previously said that it will not rush to a passport decision while leaving a large part of its population unvaccinated.

Von der Leyen said last week that the 27-member bloc expected to vaccinate 70 percent of adults by the end of the summer, after months of trouble and friction.

The commissioner’s chief said that fully vaccinating just under three quarters of adults by the end of the summer was a “goal we are sure of”.