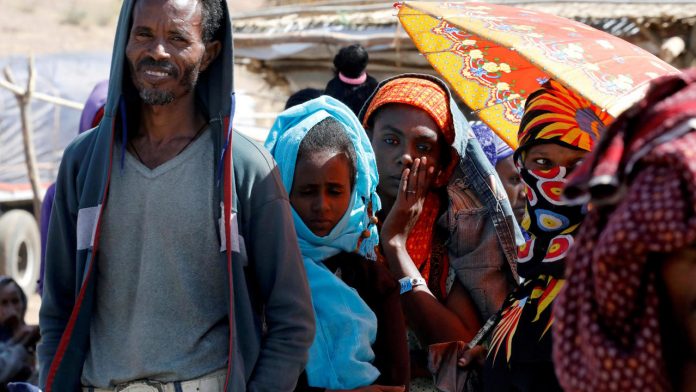 The first international aid convoy arrived in the capital of the Tigray region of Ethiopia on Saturday since the fighting broke out more than a month ago, triggering a refugee crisis and a humanitarian catastrophe.

The International Committee of the Red Cross (ICRC) said seven trucks carried medicines and medical equipment for 400 wounded and aids to Mekele, a city of half a million that had been cut off from foreign aid since the conflict began on November 4. .

“This is the first international aid to arrive in Mekele since fighting broke out in Tigray more than a month ago,” the Geneva-based ICRC said, describing the city’s health facilities as “paralyzed”.

Patrick Youssef, the ICRC’s regional director for Africa, said the deliveries would “reduce the impossible decisions on life or death” for doctors and nurses in Mekele who had endured for weeks without running water and electricity, even less important medicines.

The convoy arrived as the UN expressed growing concern over the situation of nearly 100,000 Eritrean refugees in Tigray and appealed for urgent access to help them and 600,000 others dependent on food rations.

Since the fighting began in Tigray, this convoy, together with @EthioRedCrossis, organized the first international aid to reach Mekelle.

Health care facilities are struggling to provide care for the injured and sick due to lack of supplies. Https://t.co/PMnOaStvAZ

Ethiopia had limited access to Tigray, and a blackout for communications has made it difficult to assess the humanitarian situation on the ground.

Aid groups have been warning for weeks of an impending famine crisis as food rates plummeted and life-saving relief was repeatedly delayed.

Prime Minister Abiy Ahmed, winner of last year’s Nobel Peace Prize, said on Friday that his government would be responsible for handling the humanitarian response and access to Tigray, and that Ethiopia had sent tons of food and other truck aids to Mekele this week. and other cities in the region.

Addis Ababa has rejected proposals that outsiders could play a leading role in the relief effort and an agreement last week to give the UN and aid agencies access to Tigray’s founded and deepen international alarm before another deal was announced on Wednesday.

The United Nations High Commissioner for Refugees (UNHCR) said on Friday that it had still not been able to reach four camps for Eritrean refugees since the announcement of a major military offensive against forces loyal to the Tigray Liberation Front (TPLF).

Filippo Grandi, the UN High Commissioner for Refugees, said the UNHCR had received “an overwhelming number of disturbing reports” of refugees being killed or abducted and forcibly returned to Eritrea, a secret country bordering Tigray in the north.

“If confirmed, these acts would be a major violation of international law,” Grandi said.

EU foreign policy chief Josep Borrell said on Saturday that “any withdrawal or forced return should be prevented” and called for aid groups to have “immediate, unhindered and unrestricted” access to Tigray.

The International Rescue Committee said on Friday that one of its employees was killed last month in an Eritrean refugee camp in Tigray. The Danish Refugee Council, which also helps Eritreans, said three of its guards were killed, but did not specify where.

Ethiopia said on Friday that it was returning “misinformed” Eritrean refugees on their way to Addis Ababa to return to Tigray for help and to live “legally and peacefully”.

“Forcing Eritrean refugees back into camps in Tigray poses an unnecessary risk of injury and starvation,” Laetitia Bader, head of Human Rights Watch, Horn of Africa, said on Saturday.

The UN migration agency IOM has denied that buses were used to transport refugees “to an unknown destination” and denied allegations that Eritreans were being held at one of its transit centers in Addis Ababa and being treated for forced return.

The International Organization for Migration said it was “extremely concerned” at reports that Eritreans were being displaced against their will and “under no circumstances carry out forced return of migrants and refugees”.

They said that one of its three transit centers in Addis Ababa was “taken over” by Ethiopian authorities on December 3 and that the IOM “had no management authority, supervision or involvement in activities carried out by the central authorities since then”.

As a sign of the depth of tensions over where and how aid agencies should operate in Tigray, a UN team trying to visit an Eritrean refugee camp on December 6 was shot and kept briefly by Ethiopian forces.

A government spokesman said the team ignored instructions and checkpoints about “a kind of adventurous expedition”.

Abiy declared the fighting in Tigray on November 28, saying the army had taken Mekele from the TPLF and had dismissed reports of ongoing clashes as “sporadic shootings”.

According to the International Crisis Group, thousands have been killed and about 50,000 people have fled to refugee camps across the border in Sudan.

The United States on Friday quoted “credible reports” that Eritrean forces had entered Tigray and urged them to withdraw. Ethiopia has repeatedly denied Eritrean involvement.

The TPLF dominated Ethiopian politics for nearly three decades and fought a brutal 1998-2000 border war with Eritrea that left tens of thousands dead. Abiy came to power in 2018 and won the Nobel Peace Prize the following year largely for his attempt to initiate rapprochement with Eritrea.