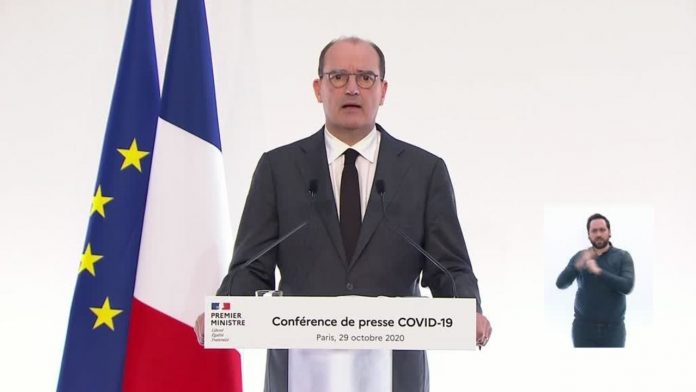 French people will only be allowed to leave their homes for food purchases, medical appointments, urgent family reasons and to commute to work, Prime Minister Jean Castex announced Thursday ahead of a new Covid-19 shutdown starting at midnight.

France enters its second nationwide lockdown this year from Friday amid a rise in Covid-19 cases that have threatened to overwhelm French hospitals.

Castex, which describes the new restrictions, said people are allowed to be outside for only an hour of training a day and no further than a mile from their home.

For each excursion, people must carry a document justifying their presence outside.

Travel within France, including to holiday homes, is prohibited, although the borders with EU countries remain open, the prime minister said. Visits to friends or family are also prohibited.

Earlier in the day, France’s lower house of parliament approved the new measures by a vote of 399 to 27 following a debate that was suspended to maintain a minute’s silence for the victims of a deadly knife attack in a church in the southern city of Nice.

Under the new measures, French schools will require all students aged six and over to wear face masks in class, Castex said.

Until now, masks were only mandatory for students 11 years and older, but Castex told lawmakers in parliament that new efforts were needed “to protect all of our children, teachers and parents.”

Shops that are allowed to remain open include garages, grocery stores, laundries, opticians and newspaper providers.

Hotels are allowed to maintain a reduced activity for work-related trips.

Place of worship remains open but no ceremonies are allowed, the prime minister added.

In a speech to the nation Wednesday night, French President Emmanuel Macron stressed that “the virus is spreading across France at a rate that even the most pessimistic did not predict.”

The new nationwide lockdown will be enforced initially until December 1, Macron announced.

He said the shutdown might begin to ease when Covid-19 infections fall back to around 5,000 per year. Day from about 40,000 per. Today at the moment.

But the government’s scientific adviser, Professor Jean-François Delfraissy, warned on Thursday that the closure could extend beyond December 1.

Speaking on France Inter radio, Delfraissy said the target of bringing infections down to 5,000 a day was unlikely to be reached by the end of November.

“On December 1, we will not have 5,000 pollutants a day. I can tell you that right away today. We need more time,” said Delfraissy, head of the scientific council advising the French government on the pandemic.

“The scenario is rather to have this lockdown period of one month, look at the different types of markers and then leave this containment through, for example, a curfew that can continue through December, possibly also cover Christmas and New Year’s Eve, and to end it only at the beginning. of January, ”he said.