Home NEWS The indictment against Trump is based on “cold, hard facts,” the prosecutor...
Facebook
Twitter
WhatsApp
Linkedin
LINE 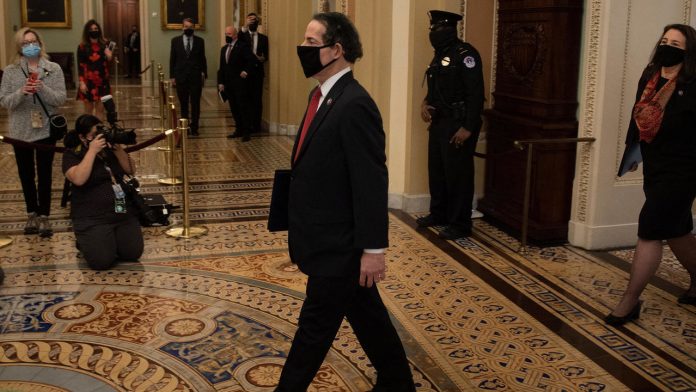 The lead prosecutor in the trial process against former US President Donald Trump said on Tuesday that his case was based on “cold, hard facts” and continued to present video evidence that Trump encouraged violence on January 6.

The historic second indictment against Trump began with a debate over whether it is constitutional to try a former president.

Lead House Prosecutor Jamie Raskin, a Democratic lawmaker from Maryland, told senators he would not dismiss them with professorships, saying, “You will not hear extended lectures here from me because our case is based on cold, hard facts.”

Raskin and the House of Representatives Democrats who served as prosecutors began their case by showing video of Trump supporters violently overpowering police at the Capitol in the January 6 attack after he encouraged people in a speech to “fight like hell” to overthrow his nov . 3 election defeat.

“If it is not an accusation, then there is no such thing,” Raskin, who led the indictment, told the compound senators – serving as jurors – after showing the video.

The video showed Trump supporters throwing obstacles and beating police officers. It showed the moment protesters tried to break in through the House of Commons’ doors as lawmakers defended themselves, including when a police officer shot and killed a protester, US Air Force veteran Ashli ​​Babbitt, as she tried to climb through a broken window.

In another scene, a rioter sifting through the contents of a legislator’s desk can be heard saying, “There must be something here we can use against trash.”

In the Capitol attack, the mob attacked the police, sent lawmakers climbing to safety and suspended formal congressional certification of President Joe Biden’s victory after Trump spent two months challenging the election results. Five people, however, including a police officer.

About 170 police officers were injured.

Trump was indicted by the Democratic House on January 13 on charges of inciting an uprising. Democrats hope to disqualify Trump from holding public office again.

Trump is the first president ever to face two lawsuits – he was acquitted in 2020 of abuse of power – as well as the first in history to be tried after leaving office. He seems likely to be acquitted thanks to the support of other Republicans in the narrowly divided Senate. Judging Trump would require a two-thirds majority, meaning at least 17 Republicans would need to join the Senate’s 48 Democrats and two independents to vote against Trump.

Senate Majority Leader Chuck Schumer, a Democrat, called the accusation against Trump: “The most serious accusations ever leveled against a US president in American history.”

Prior to the attack, Trump falsely claimed that widespread voting fraud had cost him Biden’s election. Senators watched video of Trump addressing supporters at a meeting that preceded the attack and reiterated his false allegations of electoral fraud.

“The powers of accusation, conviction and disqualification exist to protect us from presidents who try to outdo the power of the people in their elections and replace the rule of law with the masses,” Raskin told senators.

Raskin said presidents would create a “January exception” that would allow them to break the law with impunity in the last month of their term if senators did not convict Trump.

Defense lawyers plan to argue that only a sitting president can face a lawsuit. But a majority of legal experts say it is constitutional to hold the trial after an official leaves office, says Michigan State University law professor Brian Kalt, a leading prosecutor.

The Senate Democrats are expected to win a Tuesday vote on the constitutionality of the trial. A Republican attempt to block the trial for these reasons was defeated 55-45 last month.

The trial is being held with extraordinary security around the Capitol in the wake of the siege, including armed security forces and a perimeter of a fence and razor.

The trial could provide clues as to the direction of the Republican Party following Trump’s tumultuous four-year presidency.

A sharp division has arisen between Trump loyalists and those who hope to move the party in a new direction. Meanwhile, Democrats are concerned that the trial could hinder Biden’s ability to quickly advance an ambitious legislative agenda.

Trump’s defense has also claimed that he exercised his right to freedom of expression under the first amendment to the Constitution when he addressed supporters at a meeting in Washington on the day of the Capitol attack.

Democratic Senator Patrick Leahy presides over the trial, which begins with hours of debate, followed by a vote on the constitutionality of a former president.

This will almost certainly only be a formality because the Democrats have enough votes, but it will give an early indication of how open the Republicans are at all.

The main part of the trial begins on Wednesday, and each side has 16 hours to present oral arguments.