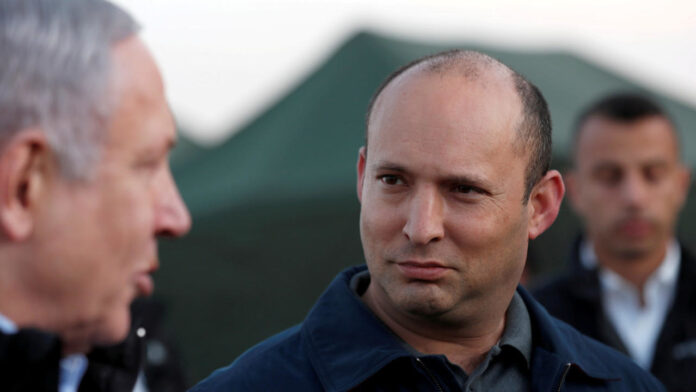 In the aftermath of the Israeli general election on March 23, the religious nationalist politician Naftali Bennett, whose Yamina party will win seven parliamentary seats, was able to determine the political future of his former boss, Prime Minister Benjamin Netanyahu.

Following Israel’s recent parliamentary elections this week, Netanyahu may not be able to form a government without the support of Bennett, his ultra-hawkish former ally who became arch-critic.

In his enviable position as kingmaker, Bennett has not yet revealed his intentions, while his party, Yamina – “right” in Hebrew – is expected to win about seven seats in the Israeli Knesset with 120 seats. This makes him critical of both pro- and anti-Netanyahu blocs, who have collided violently on the campaign track.

“Under the power you have entrusted to me, I will act with only one guiding principle: what is good for Israel,” Bennett told supporters at a Yamina election night on Tuesday. In what appeared to be deliberately vague comments, he added: “Now is the time to heal and heal the gaps within the nation.”

It was a general statement that could be interpreted in any way because the 49-year-old Israeli politician can either overthrow the prime minister politically by joining an anti-Netanyahu coalition of leftists, centrists and right-wing dissidents or save him by negotiating – from a force.

“Naftali Bennett risks selling at a high cost to Benjamin Netanyahu,” said Alain Dieckhoff, director of the Center for International Studies at Paris-based Sciences-Po University, in an interview with FRANCE 24. “The latter risks having to offer Bennett and his close allies are very important ministries such as the Department of Defense – which he has already occupied. “

Netanyahu’s horse-trading after the election could be intense, according to Dieckhoff: “Without Naftali Bennett, it is almost impossible to form a coalition. It all depends on Benjamin Netanyahu’s room for maneuver. If he does not succeed in poaching members from other parties, he will be very dependent on Yamina. “

On the campaign track, Bennett repeatedly stated that it was time for Netanyahu, 71 years old and in power since 2009, to make room for a new generation. But he also assured supporters that Yamina would not join a coalition led by centrist Yair Lapid, while not ruling out the possibility of working with Lapid or Netanyahu in a coalition.

The son of Jewish American immigrants becomes a millionaire

A native of the Israeli coastal city of Haifa and a law graduate of the Hebrew University of Jerusalem, Bennett, the son of Jewish American immigrants, may never have entered politics.

He became a multimillionaire after selling his cybersecurity company Cyota for $ 145 million (€ 123 million) in 2005 and could have spent the rest of his life “drinking cocktails in the Caribbean”, as he puts it. But his involvement in the 2006 war against Hezbollah in Lebanon convinced him to enter politics, the former Israeli soldier has told reporters.

A former major in the Maglan unit, one of the pillars of the Israeli army’s special forces, Bennett took the step and joined the then opposition Likud party, where he served as Netanyahu’s chief of staff from 2006 to 2008. But his political career really took off in 2012. when he joined and managed to lead the religious Zionist Jewish Home Party, which won 12 seats in parliament a year later.

It was a political rise that would propel him to the leadership of the main actors of the Israeli right, but Bennett was always in the shadow of Netanyahu, with whom he repeatedly agreed to govern coalitions in exchange for ministerial portfolios, including economic and religious. Minister 2013, Minister of Education 2015 and Minister of Defense 2019-2020.

Bennett is strongly opposed to the creation of a Palestinian state which, he claims, “in the long run will be another terrorist state like Gaza”, and is a strong supporter of the expansion of Jewish settlements in the West Bank, where much of his electorate is located.

Bennett describes himself as more to the right than Netanyahu and seems to enjoy grazing on Palestinians and left with burning comments like his shocking, “I have killed many Arabs in my life and there are no problems with it” comment, which made headlines in 2013. Israeli Labor politicians have not tempted his words about him either, with former Prime Minister Ehud Barak calling him a “clown” who leads a “misguided, nationalist” party that has a “whiff of fascism and corruption”.

Bennett today leads Yamina along with Ayelet Shaked, who describes himself as a secular politician in a movement of small right-wing parties advocating economic ultraliberalism, mixing lower taxes and drastic cuts in public spending with a hard line against Iran and the annexation of almost two-thirds of the occupied West Bank.

“Naftali Bennett broke into the politics of the movement known as religious Zionism, but he has expanded his spectrum on the right over the years,” Dieckhoff explained. “This led him to the head of Yamina, which is a somewhat mixed movement with a religious Zionist base and at the same time has a slightly more secular dimension, represented by Ayelet Shaked.”

‘Condemned to agree with Benjamin Netanyahu’

An Orthodox religious man who grew up in a secular family, Bennett does not deny sharing ideological ties with Netanyahu, even though the two men do not have warm personal relationships and never miss the opportunity to reach out to each other on the campaign track.

“Naftali Bennett, who has adopted a fairly strict religious practice while being extremely modern in style, is at the head of the party that has led the settlement expansion and he is still” Netanyahu-compatible “,” Frédéric Encel, Middle East expert at sciences Po, recently told Jowharand noted that Likud’s right-wing movement in recent years has “brought the two men’s views much closer”.

Bennett also distinguishes himself from other political actors by giving Netanyahu the benefit of the doubt on the three corruption cases facing the Israeli premiere, claiming that justice should take its course while other politicians have called for the Likud leader’s withdrawal from the political scene he is cleared of. of the courts.

It is a way to spare a rival he could once again rule with and offer his time until he achieves his self-proclaimed goal of becoming Israel’s prime minister.

“His profile as a religious leader is an obstacle to his personal ambitions, because the fact is that so far there has never been a prime minister in Israel who clearly identified himself as religious,” Dieckhoff said.

“Today, Naftali Bennett is not in a position to lead a government, his party holds a third of Likud’s seats after these parliamentary elections. He is therefore condemned to agree with Benjamin Netanyahu, unless he switches to the other side and provokes incomprehension. Of many of his voters. “