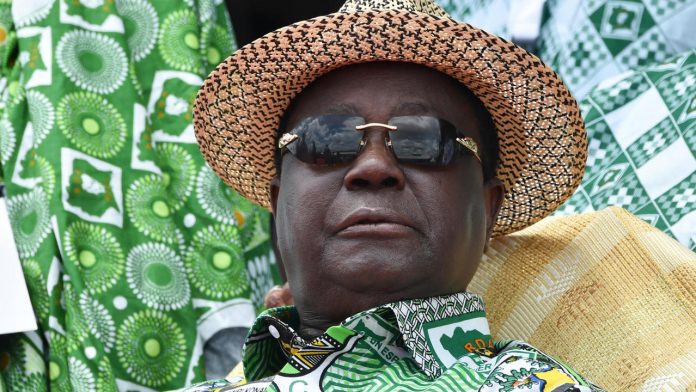 The Ivory Coast government on Tuesday accused the opposition of “planning” against the state after it promised to set up a rival government after bruises for the presidential election, which was won in a landslide by the incumbent, Alassane Ouattara.

The liberation plunged the West African nation deeper into a three-month-old crisis that has claimed dozens of lives, triggering EU appeals for calm and dialogue.

Hours after the 78-year-old Ouattara was declared victorious by more than 94 percent of the vote, Justice Minister Sansan Kambile accused the opposition of “acts of attack and planning against state authority.”

The public prosecutor in Abidjan has been asked to investigate, Kambile said, warning that “all options are on the table.”

“The mission of this council will be to … create a transitional government within the next few hours,” N’Guessan said.

The goal, he said, was to “prepare the framework for a fair, transparent and inclusive presidential election.”

Ouattara’s landslide in Saturday’s vote had been widely expected – two opposition leaders had called for a boycott of the vote and a civil disobedience campaign.

But the protests and bloody clashes have also evoked traumatic memories of a crisis a decade ago that tore the earth apart and showed lasting economic damage.

About 3,000 people died after then-President Laurent Gbagbo refused to accept the defeat of Ouattara.

N’Guessan said late Monday that the “transitional council” would be led by opposition veteran Henri Konan Bedie, 86, a former president and longtime opponent of Ouattara.

“Keeping Mr Ouattara as head of state could lead to civil war,” he warned.

They fired tear gas to disperse small groups of supporters and journalists outside, preventing the staging of a press conference called to follow up on Monday night’s announcement.

“These results are a farce,” said one who gave his name as Firmin. “We will continue with civil disobedience until Ouattara resigns.”

In contrast, Ouattara supporters sang his praises, saying he had strived to end instability in the world’s leading cocoa producer and revive its battered economy.

“He has worked hard for the country. He must continue, not only for us but for our children,” said Hamed Dioma, a scrap metal worker in a run-down district in Abidjan.

Anger triggered by Ouattara’s search for a third term has revived memories of past feuds that were mostly reconciled after a civil war in 2002 split the country in two.

Thirty people died in clashes before Saturday’s vote, often between local ethnic groups allied with the opposition and the Dioula community, which was seen as close to Ouattara, even a Muslim from the north. At least nine more have died since then.

In Geneva, the UN refugee agency said more than 3,200 people had fled to neighboring Liberia, Ghana and Togo for fear of violence.

The crisis is yet another test for a region where Guinea is embroiled in a post-election dispute, Nigeria is emerging from widespread unrest and Mali has faced a coup.

The European Union quickly called for calm after the announcement of the election results.

EU diplomat Josep Borrell issued a statement expressing “deep concern at the tensions, provocations and incitement to hatred” and called for violence to be “independently investigated”.

“The EU expects all stakeholders to take the lead in facilitating the climate and resuming dialogue … and promoting reconciliation,” he said.

A mission from the U.S. Watchdog Carter Center said “the overall context and process did not allow for a truly competitive choice,” but an African Union observer team said the vote was “generally satisfactory.”

Ouattara had said after his second term that he planned to make room for a new generation.

He says a constitutional court ruling approved his move so he could reset the country’s two-pronged presidential border.

Ouattara won a long-awaited election in 2010, although Gbagbo refused to accept defeat and Abidjan became a battleground.