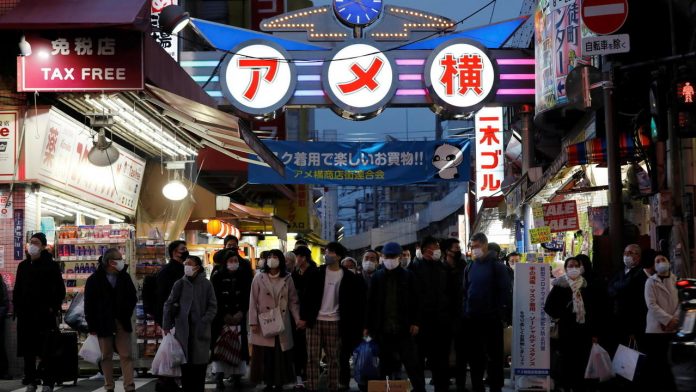 Japanese Prime Minister Yoshihide Suga said on Monday that he was considering declaring a state of emergency in the greater Tokyo area over a “very serious” third wave of coronavirus infections.

At a regular New Year’s press conference, Suga also said he hoped vaccinations would begin in Japan by the end of February, adding that he would be among the first to receive one.

He urged people to avoid non-essential excursions and said the government would introduce legislation to punish companies that violate requests to shorten hours or close, as well as provide incentives to those who follow such calls.

Suga also insisted that the government was still determined to hold the virus-suspended Olympics in Tokyo 2020 this summer, saying the games would be proof that humanity was overcoming the virus.

Suga, who took office in September, has been under increasing pressure due to his government’s response to the record number of new infections.

On Saturday, Tokyo Governor Yuriko Koike, along with governors from three neighboring regions, called on the central government to impose a state of emergency in its territories.

But the government has been hesitant to take measures that could send the economy back in the opposite direction, shortly after leaving a recession.

However, Suga said on Monday that he realized “a stronger message was needed”.

“The national government will consider issuing a state of emergency,” he said, adding that it would prioritize measures to reduce the risk of infection from drinking and eating.

Japan introduced a first state of emergency in the spring, enabling local governors to urge companies to close and ask people to stay home.

The measure does not entail any penalties for non-compliance, but the inquiries were generally observed in the spring.

The extent of each new emergency is still unclear, with no details on whether schools would be closed. Suga said “limited and focused action” would be effective, without specifying further.

Local media reported that the action could begin from Saturday, but there was no immediate confirmation.

Coronavirus outbreaks have been more limited in Japan than some other countries, with more than 3,500 deaths since the first domestic case in January.

Without a legal mechanism to enforce company closures or home orders, Japan has avoided the hardships seen elsewhere.

Suga said the government expected vaccine data from US companies by the end of January, and vaccinations could begin in late February.

“Initially, we want to start vaccinating medical workers, the elderly and those working in elderly care facilities,” he said.

“I will also take the lead in getting vaccinated,” he added in a clear attempt to strengthen confidence in a country where the vaccine’s hesitation is relatively strong.

The new increase in infection comes a little more than six months before Tokyo is set to host the virus-delayed Olympic Games.

Tokyo 2020 was postponed last spring when the extent of the pandemic became clear, but despite optimism from officials and organizers, polls show that most Japanese are opposed to holding the games this summer, which favors a further delay or immediate cancellation.