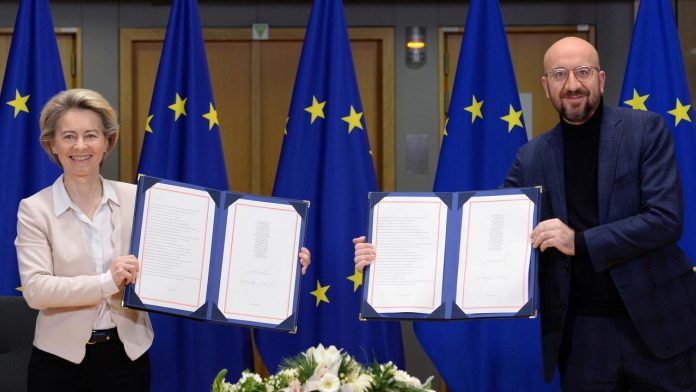 The texts would then be flown to London in a British Royal Air Force jet to sign British Prime Minister Boris Johnson, ahead of Britain’s exit from the EU’s internal market.

In his speech in Parliament on Wednesday, Johnson promised that Britain would cooperate closely with the European Union after this Brexit agreement enters into force on 1 January, when MEPs discussed the two sides’ mammoth pact.

“With this bill, we will be a friendly neighbor, the best friend and ally the EU could have,” he told parliament.

The government intends to implement all stages of the 85-page bill on the European Union (future relationship) through the Commons and the House of Lords in one day, before the EU’s trade agreement enters into force at 11:00 GMT on Thursday.

By that time – midnight in Brussels – Britain will be completely out of the EU, after a transition period of 11 months since Brexit took legal effect and more than four years after the British voted to leave in a divisive referendum.

The agreement averted the prospect of a cut-off that would have led to quotas and tariffs being imposed on all cross-channel trade, exacerbating burdens in the midst of the coronavirus pandemic, which has hit the UK harder than most.

But not everything in the trade agreement was well received in the UK. First, British fishermen accused the government of selling them out. Secondly, services, which account for 80% of the British economy, were largely left out, and the City of London is facing an anxious wait to learn on what grounds it can continue to deal with the European Union in the future.

But a faction of arch-Brexits in Johnson’s ruling Conservative party gave their blessing to the EU deal on Tuesday, and the main opposition Labor party signaled its reluctant support and ensured legislation would pass.

Despite concerns among some of his own MPs, who plan to abstain from voting on Wednesday, Labor leader Keir Starmer said neutrality was not an option given Britain’s efforts as it spans nearly five decades of integration with the European Union. the mainland.

“But the consequences are yours and yours alone,” he said, addressing Johnson’s government. “We will hold you accountable for it, every second you are in power.”

In fact, the full implications of the deal will only play out in the coming months, and UK companies will still struggle with the kind of bureaucracy they have avoided for decades when trading across the channel.

From 1 January, there will no longer be free movement of people from the UK to the EU or vice versa.

The British government is withdrawing from the European student exchange program Erasmus, which has benefited tens of thousands of young people over the years.

According to the EU agreement, musicians are not covered by exceptions that allow free passage for short-term business visitors, which triggers warnings that continental tours from British bands will be inappropriate.

The many British owners of European holiday homes find that if they do not apply for a residence permit, they will be given limits on how often they can visit their properties.

And the British will face new bureaucracy if they want to bring their pets to the EU.

According to the compressed legislative calendar, the European Parliament will only debate the Brexit affair after the new year.

In anticipation of this, the EU countries gave their green light on Monday for the agreement to have a provisional effect before Thursday’s deadline.