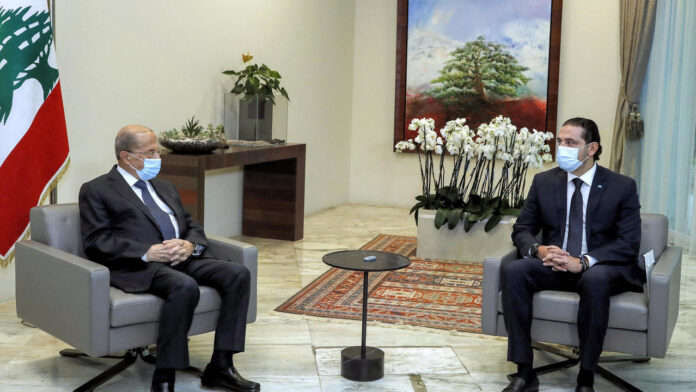 Lebanese Prime Minister Saad Hariri and President Michel Aoun failed on Monday to agree on a new government after months of stalemate, as the country sinks deeper into the economic crisis.

A sharp depreciation of the Lebanese pound, along with an explosion of poverty and unemployment, has eroded purchasing power and angered the population, once again protesting against the entrenched ruling class.

Despite public outrage and international pressure to form a government to implement reforms needed to unlock aid pledges, wrestling over cabinet posts continues seven months after the outgoing government resigned in the wake of a devastating Beirut explosion, largely blamed on official negligence.

The failure on Monday to agree on a cabinet line-up shattered hopes of a breakthrough, with public barbs being exchanged between the two leaders raising fears of a total dead end. No new meeting has been announced.

“I asked the president to listen to the misery of the people and give this country its last chance to have a technocratic government that can reform,” Hariri said from the presidential palace after his proposal was rejected.

Hariri said Aoun and the party he founded pressured a third of all government seats, giving them the right to veto government decisions.

Aoun “sent me last night a line-up that gives his team a third of the seats,” he said. “This is not acceptable.”

The presidency quickly denied in a statement any desire for a “blocking minority” and expressed “surprise” at Hariri’s “words” and tone.

Hariri, a triple prime minister elected in October to form a new government, announced an alternative line-up that he said he had handed over to the president more than three months ago.

Hariri’s proposals consisted mainly of experts and included new names, such as Firas Abiad, the head of Lebanon’s main coronavirus hospital, Nasser Yasin of the American University of Beirut, and prominent political scientist Fadia Kiwan, according to a list published by his office.

The outgoing government of Prime Minister Hassan Diab resigned in the wake of an explosion on August 4 in the port of Beirut that killed more than 200 people and ravaged the capital.

Lebanon’s leaders have been blamed for government delays, with Aoun urging Hariri to leave if he is unable to form a government that suits all parties.

Hasan Nasrallah, the leader of the powerful Shiite Hezbollah movement and a close ally of Aoun, has also criticized the stance.

In a speech on Thursday, Nasrallah called on Hariri to abandon his work for an 18-member cabinet made up entirely of technocrats.

“A government of technocrats not supported by political groups will not save the country,” Nasrallah said, urging established parties to be represented.

More than half of the population lives below the poverty line and the national currency has lost more than 85 percent of its value against the US dollar on the black market.

The rapid currency move revived street protests that began in 2019 before being temporarily eliminated last year due to the coronavirus pandemic.

Protesters criticized officials for fighting over cabinet posts instead of rallying to form a government that can lead reforms long demanded by donors and the international community.

“There are no signs that we are moving towards a solution,” Lebanon’s French-language daily L’Orient-Le Jour reported on Monday.

Pressure from the international community has also increased.

“I want us to be able to discuss the levers together that allow us to put pressure on the Lebanese authorities,” he said.