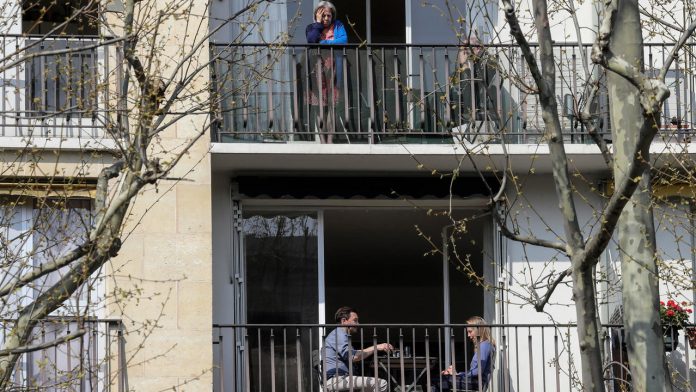 Anxiety, isolation, winter and the prospect of holiday season separated from loved ones can further weaken the general mental health situation, warns an expert as France enters a second shutdown.

With public morale already marking itself from the combined attack on the health crisis, the economic recession and the coming winter, France embarked on another nationwide coronavirus lockdown on 30 October.

Following the initial closure from March 17 to May 11, France eased restrictions over the summer. But with Covid-19 cases rising sharply in mid-October, another nationwide lockdown has been introduced – expected to last until at least December 1 -. The French have once again been thrown into an era of isolated telework and “attestations” (permits to leave home) beyond the bleak prospects of the pandemic dragging into the new year.

In an interview with FRANCE 24, Astrid Chevance, a psychiatrist and epidemiologist at the Paris-based Center for Research in Epidemiology and StatisticS (CRESS), discussed the potential mental health consequences of the second lockdown.

FRANCE 24: This second lockdown promises to be a new ordeal. Should we fear greater psychological effects on the population?

Astrid Chevance: It is very difficult for researchers and even more so for doctors to predict because we are living in a new situation. But unlike the initial shutdown, mental health studies – like the one conducted by Santé Publique France [the French national health agency] – shows that the population today is particularly tired. Depressive symptoms are already very marked and may increase rapidly in the future. Public morale is not good.

During the first weeks of March, some form of agitation was observed among certain social classes. The situation was unprecedented, and some, even though they are in the minority, may have seen this period as a kind of opportunity. Today, of course, we are no longer in this situation. People have become aware that we are facing a phenomenon that is not completely controllable and whose outcome we do not know. So there is a general anxiety attached to all these uncertainties.

In addition, we were already forced to change our habits during the initial shutdown, which may have been a trial for many. Despite these efforts, we now see that they were not enough. So there is a general mental wear and tear because we do not see the end of this health crisis.

Q24: Can winter aggravate this trauma?

AC: Seasonal depressions typically occur in November. The prospect of having to be locked at home during this period and reduce our social contacts obviously does not help. The holiday season is usually difficult for people suffering from mental illness and for those who feel lonely and find themselves in situations of social isolation.

But the end of 2020 could be even more complicated for everyone, as family reunification may not be allowed. Many families still have difficulty digesting this prospect.

Q24: Who are the most vulnerable and likely to suffer more from this second incarceration?

AC: The people who are most vulnerable are primarily victims of domestic violence and those who are limited with their aggressors – these are mostly women and children. Even in this particular context, these people should not stay home with their attackers. They need to protect themselves and contact associations that may be able to help them. [The French domestic violence hotline is 3919 and 119 for child protection services.]

Another demographic risk is those who suffer from chronic diseases, psychiatric or not. These people may feel abandoned in their follow-up due to congested medical systems. However, they must not be allowed to interrupt their medical care. Students also liked more. Many find themselves isolated and far from their families in a situation of deep uncertainty about their future.

Finally, another segment of the population may be even more vulnerable: those who experienced pathological deaths during the first wave [of the Covid-19 crisis].

Many people who lost a loved one in the spring were unable to experience a conventional grieving process. Some were unable to attend funerals or visit loved ones before they died. The social rituals and funeral rituals that surround grief allow us to be in a transitional phase. But some people today still suffer from not having had this opportunity. This is undoubtedly one of the reasons why the government eased certain restrictions [cemeteries are open and visits to relatives in nursing homes are permitted in the second lockdown, unlike the first].

Q24: What is your advice to help people do better during this period?

AC: It may seem difficult because we do not all have the same material conditions, but you need to be able to diversify your activities as much as possible. Because when we are stuck in a mode of operation, we cut ourselves off from the rest of the world. However, if the symptoms of anxiety are too severe, do not hesitate to contact your doctor.

More generally, we need to help people around us and keep in touch with the people who help and support us in a difficult time. It is also important to maintain contact with the most fragile people and monitor those who are not feeling well. Also keep a regular daily rhythm: Do not disturb your sleep cycle, eat at regular hours, try to maintain physical activity.

Finally, it is important to limit practices that may aggravate our condition (alcohol, drugs, etc.) or our anxiety in the long run. As anxiety levels rise, people try to slip and forget their state of stress. They can then engage in behaviors that relieve them at the moment, but which in the medium or long term will be harmful. For example, avoid spending too much time on social networks or 24-hour news channels. They can undermine our equilibrium when there is already great uncertainty.