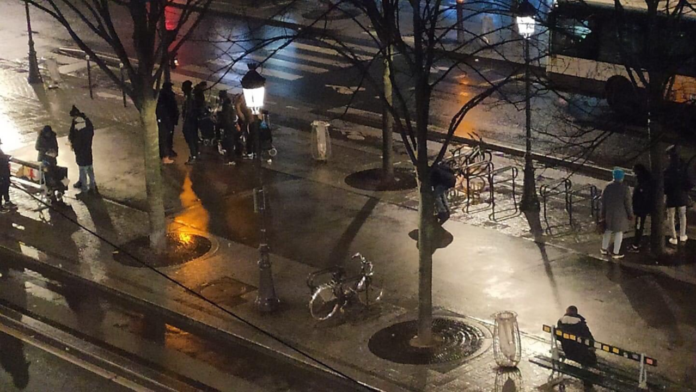 Tired residents of the Stalingrad district of northern Paris have taken to social media to post videos documenting insecurity, pollution, noise and violence caused by the growing number of crack users and retailers in the area. Residents say the curfews and curfews imposed during the Covid-19 pandemic have highlighted the problem as local organizations work to ease neighborhood tensions.

If you go to the Stalingrad district in northeastern Paris, you will see many people breaking the curfew at 6pm to slow down the spread of Covid-19. A video posted on Twitter on March 6 shows a dozen people gathered in the square known as the Place de la Bataille-de-Stalingrad. Tensions grow when a fight breaks out between two people in the group.

The author of this tweet, who says he filmed the video from his window, says he can not sleep because of the noise. The tweet was written in French and published by @ Stylingrad1. The rough translation is, “22:45 and we want to sleep, is that too much to ask? @prefpolice, here are some retailers if you want them. And violent! Still around the lady and her caddy. And the police behind who do nothing. ”

Other pictures that have appeared online are more worrying. A video released on February 24 shows a man with a giant knife walking next to the MK2 cinema near the Bassin de la Villette, the largest man-made lake in Paris.

Children in pain, will not come to sleep, “bourrés” beuglements as they reason that resonate in everything. I’ve been seeing a mec with a big 🔪, I’m afraid they’ll have a bad time but … cf 40th sec 🥺, have a good exit outside, are in great distress psy 😢 pic.twitter.com/PjJ5ROF1h5

This video received more than 6,700 views on Twitter. It was originally published by the account @infernal_stalin. The caption, in French, is translated something like: “Children in tears, who can not sleep, wave from” drunkards “who they say echo around the apartment. [They] tell me they saw a man with a big [knife], I told them they did not, as 40 “in … are afraid to go out, are in serious mental distress …”

In late 2019, authorities cleared the so-called “Crack Hill” at the foot of a highway interchange near the Porte de la Chapelle. Since then, users of this highly addictive drug have begun to congregate near the Porte d’Aubervilliers and Stalingrad. They continue to be pushed from one block to another by successive police operations. Lock-ups and the curfew imposed during the pandemic have made this issue even more visible.

From his window, Frédéric Francelle looks out over the Éole Gardens, where a large number of crack users spend their days. Jowharobservers spoke to him at 6 pm one evening and he described what he saw:

The park just closed and I see about 40 people outside the rue Riquet exit. In general, they stop until about 21:00 and then go towards the Place de la Bataille square in Stalingrad.

Once they partyed down at 3 o’clock … It’s a densely populated area and I get the idea that things will escalate. One day someone will go down and start hitting people with a baton.

Francelle says he is not convinced that the police are doing anything – especially since there do not seem to be enough of them to intimidate retailers and users. Nor is he a fan of local groups handing out sterilized cracks to reduce the health risks to users:

It’s like leaving a bottle opener and a glass to an alcoholic! Nothing drives them to get out of their habits. These people need care, they need a reason to live. I do not know what to do, it really is not over yet.

Our observer, Frédéric Francelle, filmed this video from her cracked user window below. He posted this tweet on February 11 under the handle @ FrancelleFrdri1. It is translated from French something like: “When the Eole gardens are closed due to snow … it does not change anything. Users clearly sit on Rue d’Aubervilliers and smoke in front of everyone. “He then appeals to the police and other officials to do something about it.

‘We are trying to repair the social glue in this area’

Some locals have distributed free breakfast to migrants and the homeless in the Éole Gardens. Groups of crack addicts tend to gather several dozen meters from gardens and sometimes stop for a free meal.

JowharObserver team met Anna-Louise Milne from the group P’tits dej ‘solidaires [Editor’s note: Their name translates to Solidarity Breakfasts]. Milne says the fact that volunteers already gather in the park every morning has made it easier for social workers, health care workers and other volunteers to reach addicts.

We offer people a nice, convivial collection. It makes it possible to reach these people. When three or four nurses go out on their own, it can be difficult [Editor’s note: because there are a large number of addicts and sometimes they can behave violently]. But our presence creates a good framework for them to reach out.

We are trying to repair the social glue in this area. I have lived here for 29 years but unfortunately people tend to only see their little corners of the world. People do not want addicts to live right outside their front door. But pushing them away from one area to another is not a solution. We need to change that attitude.

Our work has an impact on neighborhood life. I’m not sure if it affects crack users. We try to talk to them, but it’s really hard. We give them coffee and something to eat. It gives them some sugar, but that’s it. But our presence and our activity improve the quality of this place.

P’tit’s Dejs Solidaires organization often publishes updates about its breakfast program online. In this post from February 21, they explain that everything went smoothly with their breakfast program that day. “Even the sometimes ‘unstable’ guests were calm and receptive”, reads the post.

“Our role is to make contact and then maintain it”

Those who contact us are generally in mental distress. Most have social difficulties and often struggle with administrative problems. They want to take a break. We work to try to improve their daily lives.

We also work with people who do not want to stop doing drugs. Our goal is to make the use, which they will do anyway, safer for their health. Drug users often cannot access services for vulnerable people. For example, their habit often means that they cannot access housing. Our role is to make contact and maintain it to make these people care.

Workers with the Aurore Association conduct patrols and distribute safe drug use kits. They also offer addicts housing solutions and other forms of care. Gomberoff explained to our team how his organization works.

Aurore operates a group housing facility for users. Currently, 14 people live in the same building with common common areas. They also have access to care there. Gomberoff believes that this type of setting can help solve the problem of cracks.

Paris is not the only city with this type of problem. In the 1990s, Amsterdam also faced serious problems with cracks. This led to a lot of chaos including riots in the streets and even deaths. However, they set up structures to deal with the problem, including places where people could use it safely as well as special accommodation facilities for crack users.

However, the association is struggling to find the place for this type of center in a city where the housing market is saturated. And if you want to open a safe use center, you really have to work closely with the locals and the police.

In 2019, the Paris city government and the police department added 9 million euros to a plan to deal with the crash issue over the next three years. They planned to create 80 permanent residences for crack users in 2021. A first center for safe use was opened in the Lariboisière Hospital in Paris’ 10th arrondissement (district) in 2016.

In February 2021, the government in the 19th arrondissement, where Stalingrad is located, created a special service called the Citizen Observatory for Addiction (Observatoire citoyen de la toxicomanie), a group consisting of elected officials, organizations, store owners and 22 citizens randomly selected from the most affected neighborhoods.