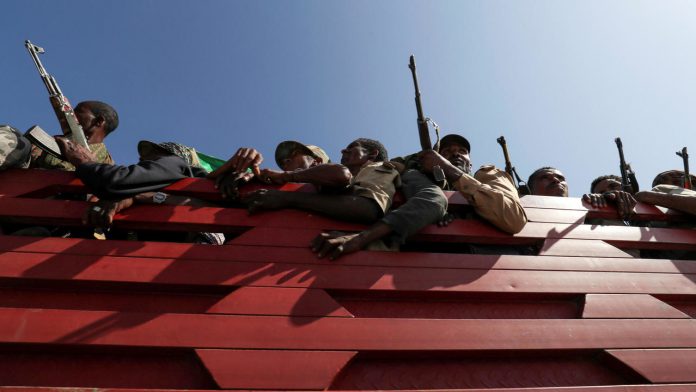 Aid agencies can not bring food and health supplies to Ethiopia’s northern Tigray region, the UN warned on Thursday in the latest sign that fighting there is intensifying. Analysts say federal forces are facing a tough opponent in the Tigray People’s Liberation Front (TPLF), and that the conflict threatens to further destabilize other parts of Ethiopia.

Tigray has become increasingly isolated from the outside world since the fighting began on November 4: Airports and roads out of the region have been closed while internet and telephone connections have been cut off. On 12 November, the UN Humanitarian Office reported a “shortage of basic goods” affecting “the vulnerable first and foremost”.

On the same day, Ethiopian Prime Minister Abiy Ahmed wrote on Twitter that federal forces had “liberated” the western part of Tigray. However, given that Tigray’s communications have been largely disrupted, it was not possible for the news agencies to verify this claim.

On Wednesday, Sudanese officials said more than 10,000 Tigray refugees had fled across the border into their country, adding that they expect to see a total of 200,000 Ethiopian refugees.

The European Union, the African Union and the United Nations have all called for a ceasefire. However, Abiy tweeted on Tuesday that “we will not rest until this junta is brought to justice” – referring to the Tigrayan People’s Liberation Front (TPLF), the political party and the armed group that runs the region bordering Eritrea. Diplomatic and security sources told Reuters that Abiy is anxious to crush his opponents in Tigray and does not want to mediate.

‘No incentive for TPLF to stay in the system’

The TPLF dominated Ethiopia’s ruling coalition for decades after its leading role in overthrowing Derg – a Marxist junta led by the infamous dictator Mengistu Haile Mariam – in 1991. That changed in 2018, when mass protests – largely among Oromo’s ethnic group – took over the coalition. to elect Abiy as his new, reformist leader. Oromos is Ethiopia’s largest such group, comprising about a third of the population, including Abiy.

After Abiy became Prime Minister in April 2018, several senior TPLF officials were indicted for human rights violations and corruption. The TPLF responded by accusing Abiy of targeting them in a politically motivated campaign. In 2019, the TPLF refused to join the Welfare Party, the attire that Abiy created to merge and replace the ruling coalition between ethnic parties.

When Abiy’s government delayed this year’s general election until 2021, citing Covid-19, the TPLF accused the prime minister of using the pandemic to hold on to power beyond its mandate.

The TPLF then held unilateral regional elections in September. The federal government refused to accept the results. The Ministry of Finance stopped distributing money to the Tigrayan regional administration and said it must be given to lower levels by the government.

After the conflict began, the federal government went further, with the Ethiopian parliament voting on November 7 to dissolve the Tigrayan regional parliament. “This gives TPLF leaders no incentive to stay in the system,” Nic Cheeseman, a professor of democracy and international development at Birmingham University, wrote in a tweet.

Despite losing political influence in the rest of Ethiopia since 2018, the TPLF is still a fighting force of up to 250,000 troops, according to the International Crisis Group. Many of its officers were battle-hardened in the fight against Derg and the 1998-2000 conflict with Eritrea.

“I think Abiy Ahmed is very wrong,” said Yohannes Woldemariam, an expert on the Horn of Africa and professor of international relations at the University of Colorado. “This is a very, very serious situation,” he continued. “You just have to look at the history of TPLP; it is a very experienced organization. So for Abiy Ahmed to try to dismiss it – it does not seem very realistic. ”

“The TPLF had command of Ethiopian military forces for a very long time, so they have been able to gather a large number of followers,” added Patricia Rodrigues, an East African analyst at consulting firm Control Risks.

The northern command of the Ethiopian army based in Tigray includes a large number of Tigray officers and troops. It comprises more than half of the national army’s soldiers and mechanized divisions. Like the TPLF, the Northern Command gathered much of its combat experience from its disproportionate role in the conflict with Eritrea.

“It seems that large parts of the Northern Command’s command, probably the Tigrayan officers, have joined the regional government or otherwise come under the leadership of the regional government after a powerful takeover, and this includes allocating heavy weapons,” he said. William Davison, in Ethiopia. expert at the International Crisis Group.

Meanwhile, thousands of security forces and militia fighters from the nearby Amhara region have been deployed to fight for the federal government against the TPLF. A dispute between Tigray and Amhara over the border between the two regions – with Amhara claiming a piece of territory within Tigray – has been raging for decades.

“Federal intervention through the Amhara region into southwestern Tigray – with some involvement of Amhara’s regular regional security forces and irregular Amhara forces at least around the border areas of western Tigray claimed by Amhara factions – has already exacerbated this situation,” Davison said. “If the Amhara factions use the federal intervention in Tigray to try to push home territorial claims, it would make the conflict even more entrenched.”

“My enemy’s enemy is my friend”?

Ethnic violence has flared up elsewhere in Ethiopia in recent months. On November 1, gunmen killed 54 people – including children – after rounding them up in a schoolyard west of the Oromia region, according to Amnesty International. Survivors of the massacre told Amnesty that Amharas were targeted and “pulled from their homes”. The Ethiopian government said the Oromo Liberation Army (OLA), a separatist armed group, was responsible for the mass shooting. Last month, about 67 people were killed in Oromia when anti-Abiy protests developed into ethnic clashes.

Abiy came to the office and promised to uphold Omoro’s civil rights while emphasizing Ethiopian national unity within a democratic framework. He won international acclaim by forming a peace deal with the OLA shortly after he became prime minister – in addition to the agreement with Eritrea that won him the Nobel Peace Prize in 2019. Nevertheless, the decade-long OLA uprising has continued to swim.

“Because of the tension between the center and the periphery – and Abiy Ahmed who enters the back of protests in the Oromia region and transforms the federal party into a united party – you have much stronger demands within the many nations that make up the Ethiopian federation nationalist claims to autonomy, and they have only become stronger, says Ahmed Soliman, a fellow at Chatham House who specializes in the Horn of Africa.

“Some of these allegations, in the environment we now have in Ethiopia, have become much more violent,” Soliman continued. “The country has seen an increasing flow of weapons, not only to militant groups but also to civilians who want to protect themselves from increasing security threats around them.”

“When we see this federal intervention to remove a regional government, it has the potential to catalyze other concerns about the undermining of regional autonomy, and there is some support from other Ethiopian ethnationalist groups for the Tigrayan cause at this time,” Davison said. “Often they have a history of hostile relations with the TPLF since it was in power – but now that the TPLF is fighting against what some perceive as a dictatorial, centralizing regime, there is a kind of ‘my enemy’s enemy is my friend’ calculation. . ”