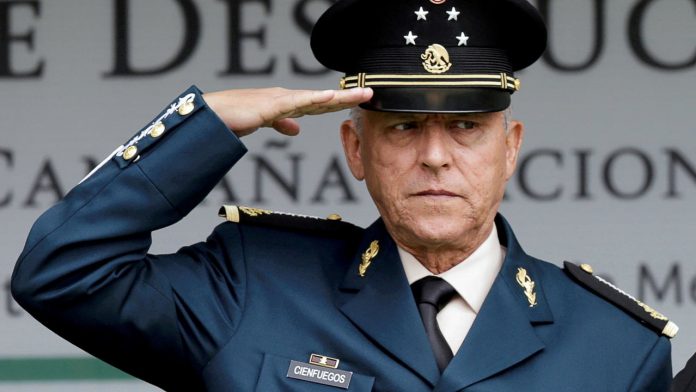 The U.S. Department of Justice announced plans on Tuesday to abolish drug trafficking and money laundering for a former Mexican Secretary of Defense in U.S. custody so Mexico can conduct its own investigation and possibly prosecute him.

Acting U.S. Attorney for the Eastern District of New York, Seth DuCharme, asked the judge in charge of the case, Carol Amon, to release Salvador Cienfuegos from prison and send him back to Mexico accompanied by marshals.

In October, US authorities arrested 72-year-old Cienfuegos at a Los Angeles airport to the surprise and annoyance of Mexican officials.

Cienfuegos, a retired general, was accused of conspiring to produce and distribute “thousands of kilograms” of cocaine, heroin, methamphetamine and marijuana in the United States between December 2015 and February 2017.

Since the arrest, prosecutors in Mexico opened their own probe, US Attorney General Bill Barr and his Mexican counterpart Alejandro Gertz Manero said in a joint statement.

“In the interests of our united front against all forms of crime, the US Department of Justice has decided to request the dismissal of US criminal charges against former Secretary Cienfuegos so that he can be investigated and, if appropriate, prosecuted under Mexican law,” he said. their statement.

Cienfuegos did not plead guilty to the charges – from which time he was a key figure in President Enrique Pena Nieto’s 2012-2018 government – before a judge in New York last Thursday. He will meet Judge Amon Wednesday for a new hearing.

Court documents presented to Amon on Monday show that the US government asked her to keep the information about the dismissal of the charges secret until Wednesday’s hearing, as publication “could damage the government’s relationship with a foreign ally.”

The judge asked prosecutors for further explanation, and when she did not receive them, she decided to release the documents on Tuesday night.

In the documents, DuCharme assures that Cienfuegos “will voluntarily leave the United States and be quickly transported to Mexico in custody by the U.S. Marshals Service.”

DuCharme also asked the judge that the withdrawal of the charges not take effect until the defendant “enters and has been released in Mexico.”

Cienfuegos was arrested at Los Angeles International Airport on October 15 while traveling with his family and charged with drug trafficking and money laundering.

If he had been tried and found guilty in the United States, he would have received a sentence of 10 years to life imprisonment.

The Mexican government complained bitterly that it was being held in the dark about the fall of Cienfuego.

The US indictment was filed in August 2019, but was only made public after Cienfuego’s arrest, apparently due to suspicions of corruption among high-ranking Mexican officials.

Mexican Foreign Minister Marcelo Ebrard tweeted that under an agreement between the Mexican and US Attorney General’s Offices, Cienfuegos would be “returned to Mexico to be prosecuted here if the judge agreed in the case.”

At a press conference, Ebrard hailed the move as a “respect for action”.

It is “an act that we see with sympathy and we think is positive because we do not see it as a way of impunity but as an act of respect for Mexico and the Mexican armed forces,” he told reporters.

He added that Mexico argued that in order to reach an agreement with the United States, if the alleged crimes were committed within its territory, Cienfuegos should also be prosecuted in Mexico.

At Mexico’s request and work “under the Convention on the Sharing of Evidence”, the US Department of Justice has “provided Mexico with evidence in this case and undertakes to continue cooperation … to support the investigation by Mexican authorities”, the statement by Barr and Gertz read.

The charges against Cienfuegos appear to have come from witnesses in the US trial of drug lord Joaquin “El Chapo” Guzman, who was sentenced in New York to life in prison in July 2019.