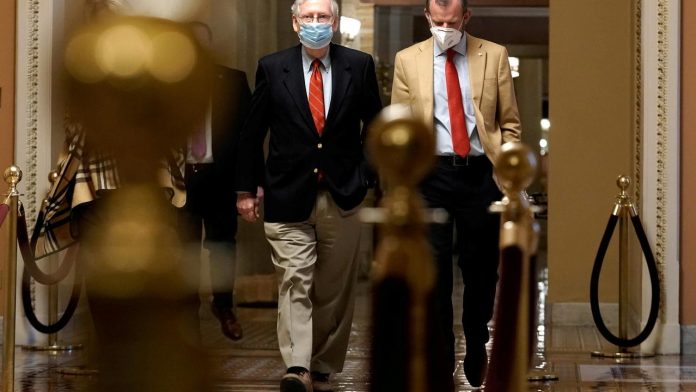 US congressional leaders reached an agreement on Sunday on a $ 900 billion package to provide the first new support in months to an economy and individuals affected by the powerful coronavirus pandemic, with votes likely on Monday.

The package would be the second largest economic stimulus in US history, after a $ 2.3 trillion bill approved in March. It comes when the pandemic accelerates and infects more than 214,000 people in the country every day. More than 317,000 Americans have already died.

“Finally, we have the two-party breakthrough the country needs,” Republican Senate Majority Leader Mitch McConnell said on the Senate floor after months of controversial debate.

Republican and Democratic leaders said the package should have enough support to pass both chambers of Congress.

The package would provide $ 600 direct payments to individuals and increase unemployment payments by $ 300 a week. It also includes billions for small businesses, food aid, vaccine distribution, transit and healthcare. It extends a moratorium on foreclosures and provides $ 25 billion in rent subsidies.

“Anyone who thinks this bill is enough does not know what is happening in America,” Democratic Senate leader Chuck Schumer said at a news conference. He said he would push for more help after Democratic President Joe Biden takes office on January 20.

Lawmakers said they had resolved disputes over the Federal Reserve’s lending authority and other issues that forced negotiations into the weekend.

The Democratic-led House of Representatives is likely to vote on the package on Monday, with the Republican-controlled Senate following, according to House Democratic leader Steny Hoyer.

The congress aims to include the $ 1.4 trillion coronavirus assistance package, which will fund government programs through September 2021.

But state funding should expire at midnight Sunday (0500 GMT Monday). The House and Senate both voted to extend funding through Monday, buying more time to cope with the coronavirus package and major government spending. Trump must sign it into law to avoid disruption.

The aid proposal omits two of the most controversial parts of the negotiations: legal protection for companies from coronavirus lawsuits, which the Republicans had sought, and the great support for state and local authorities that Democrats advocated.

But the package helps state and local governments indirectly by providing billions for schools, coronavirus testing and other spending, Schumer said.

It also contains elements unrelated to the pandemic: a bipartisan provision aimed at ending surprise medical billing and one approving flood control and other water-related projects.

The bill would allow the Federal Reserve emergency lending program to expire on Dec. 31 for businesses and state and local governments, which Republicans said was unnecessary government interference in private business. But that does not stop similar programs from being created.

The pandemic will be the biggest crisis facing Biden’s new administration, although signs of hope have emerged as the United States has begun vaccinating people against the highly contagious respiratory disease.

In the eleven months since the first cases of the new coronavirus were documented in the United States, COVID-19 has put millions of Americans out of work, with unemployment rising. Economists say growth is likely to remain sluggish until vaccines become widely available by mid-2021.