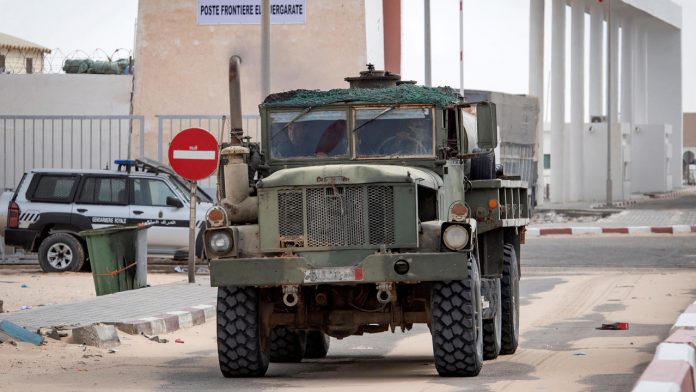 Western Sahara’s main independence The Polisario Front bombed the Guerguerat buffer zone under Moroccan control in the southern part of the desert area in a night attack Rabat is described as part of a “propaganda war”.

“The Saharawi army has launched four rockets in the direction of … Guerguerat,” on the border between Morocco and Mauritania, the Saharawi press agency SPS said in a statement on Sunday, referring to a military leader of the Saharawi forces.

Morocco launched a military operation on November 13 in the buffer zone of Guerguerat, in the extreme south of the former Spanish colony, to drive out a group of Saharawi militants blocking a transit route to neighboring Mauritania.

The SPS statement also reported attacks along the security wall that separate Saharawi fighters from Moroccan forces in the vast desert.

A senior Moroccan official contacted by AFP in Rabat said: “It harassed fire near the Guerguerat area, but it did not affect the main road, traffic was not disturbed.”

“It has been part of a cycle of violations for more than three months,” he said.

“There is a desire to create a propaganda war, a media war over the existence of a war in the Sahara” but “the situation is normal,” he said.

Western Sahara is a disputed and fragmented former Spanish colony, mostly under Moroccan control, where tensions with the Polisario front have been simmering since the 1970s.

In November, Morocco sent troops to a UN-patrolled buffer zone to open a new road leading to Mauritania.

The Polisario responded by declaring a ceasefire from 1991 invalid and claiming that the road had not existed when the ceasefire was signed.

The two sides are reported to have since exchanged regular fire along the boundary line.

UN-backed ceasefire agreements were intended to lead to a referendum on self-determination.

Morocco has offered autonomy, but claims that the territory is a sovereign part of the empire.

UN-led negotiations with Morocco and Polisario, with Algeria and Mauritania as observers, have been suspended since March 2019.

The Polisario Front, which fought for an independent war from Morocco from 1975 to 1991, said it was still willing to join UN talks on the future of the territory – but would not lay down its arms.

“In the past, we put all our trust in the international community and definitely ended our armed struggle,” senior Polisario security chief Sidi Ould Oukal said on Tuesday.

“We have been waiting for 30 years. Thirty years of broken promises, preventive and unsustainable waiting.”

Ould Oukal insisted that the group was “open to mediation”.

“But at the same time, we will continue the armed struggle, based on past experience,” he said.

For its part, Morocco’s position was strengthened last year by the United States’ recognition of its sovereignty over the entire disputed territory and broke decades of precedent.

The move came under President Donald Trump in exchange for Rabat normalizing relations with Israel.