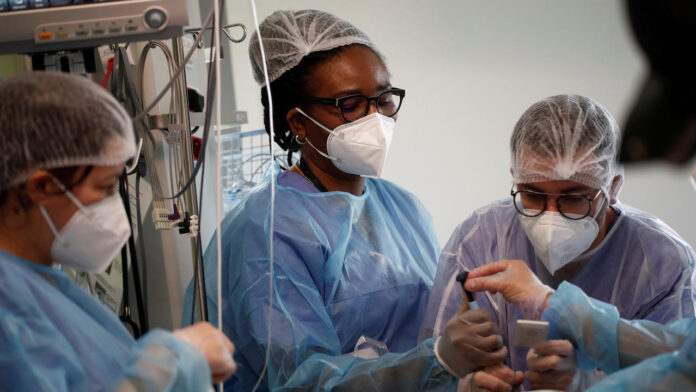 The situation COVID-19 in greater Paris is “particularly worrying” and the government will take extra restrictive measures there if the pandemic continues at its current pace, the French health minister said on Thursday.

While new infections do not grow exponentially, the number taken to intensive care has reached a new level of 3-1 / 2 months nationally, close to 4,000, as France faces more dangerous variants.

“Currently, we can say that the variants are more contagious and more dangerous and that they now represent more than two thirds of infections in France,” said Olivier Veran.

He said a new patient went into intensive care in the greater Paris region every 12 minutes, adding that he did not know when the current peak of the epidemic would be reached there.

France has introduced local weekend stops, on top of a national curfew at 6pm in the northern and southern parts of the country. But the government has so far resisted such measures for greater Paris.

In the Paris region, the number of people in ICU units is now close to 1,100 and could reach 1,500 by the end of March if the current trend continues, Veran said, adding that the level would be “critical” to the area’s hospital system.

“We will take all necessary action if the spread of the pandemic maintains its current rhythm,” he said.

France hopes that vaccination will make it possible to avoid new restrictive measures. In response to some European countries interrupting the shot from AstraZeneca, Veran said that France saw no reason to follow suit.

After the Ministry of Health’s information was completed, an official announced that Foreign Minister Jean-Yves Le Drian would isolate himself after coming into contact with a family member who had tested positive.

The seven-day moving average of new infections daily is 22,105, exceeding 22,000 for the first time since 22 November.

There were 265 new deaths in the last 24 hours, bringing the total to 89,830, the seventh highest in the world, compared with a seven-day moving average of 285.

The Ministry of Health also reported that 4.54 million people, or 8.7% of the adult population, had received a first vaccine and 2.16 million had also received a second shot, for a total of almost 6.71 million injections.

The government aims to vaccinate 10 million people in mid-April, 20 million in mid-May and 30 million by the summer.