Home NEWS This huge crowd in Turkey has nothing to do with France’s Muhammad...
Facebook
Twitter
WhatsApp
Linkedin
LINE 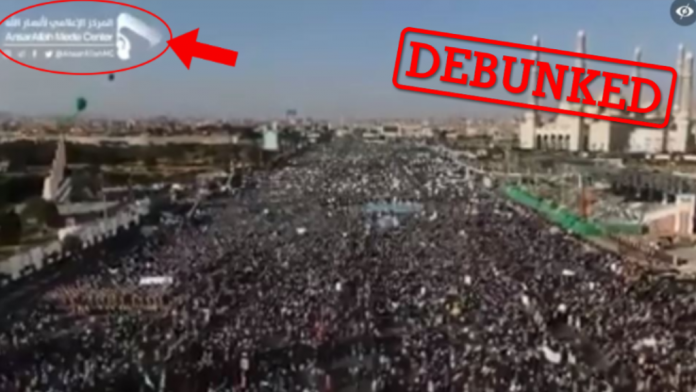 A video posted on Facebook on October 24 has gone viral on Arabic-speaking social media platforms. The post says it shows huge crowds gathering in Istanbul to defend the Prophet Muhammad, following French President Emmanuel Macron’s statement that he would protect the right to publish potentially offensive cartoons. However, the video actually shows a celebration of the Prophet Muhammad’s birthday in November 2019 in Sana’a, Yemen.

The Arabic-speaking site Watar Net (which is reportedly a Jordanian news site not yet officially launched) published this video, which soon garnered more than 2,000 comments and was shared more than 15,000 times.

“We will never give up our cartoons,” Emmanual Macron announced on October 21 during the national tribute ceremony for French teacher Samuel Paty, who was assassinated for showing a class a caricature of the Prophet Muhammad. These words were met with anger in the Muslim world, especially in Turkey, where President Recep Tayyip Erdogan immediately called for a boycott of French products.

There are several visual clues in the video that help us decipher where it comes from: the logo at the top left of the screen refers in Arabic to the “Media Center of Ansar Allah”. Ansar Allah is the official name of a Houthi-armed religious movement based in Sa’dah in northern Yemen, which has been in control of the capital Sana’a since 2015. According to the Arabic erroneous website Fatabayanou, a search in Arabic for the keyword ‘prophet’ on this venture’s YouTube channel brings up the original video, published on November 10, 2019 with the following caption: “Yemenis are followers of the great prophet during the birthday party on November 10, 2019”. Here is the video that can be found on YouTube.

There’s one more clue: part of a giant mosque is visible in the upper right corner of the video. According to Fatabayanou, it can be identified as the Essaleh Mosque in Sana’a, Yemen’s largest mosque, which was inaugurated in 2008. A quick online search confirms these details.

Left, a screen shot showing a large mosque; right, an image shared on Google Maps of the Essaleh Mosque in Sana’a.

So this video actually goes back to 2019 and was filmed in Yemen during the ‘Al-Mawlid’ celebration of the Prophet’s birthday and has no connection to the current protests in the Muslim world against France.