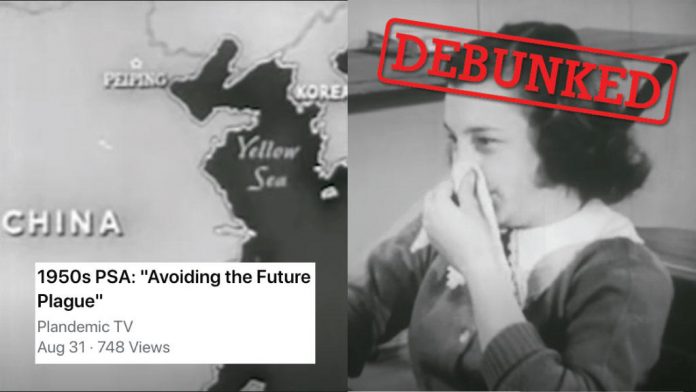 The devastation caused by the Covid-19 pandemic this year has been exacerbated by the onslaught of fake news and conspiracy theories surrounding the virus. Example: a two-minute black-and-white video that allegedly predicted the 1956 pandemic has been shared repeatedly on social media since August. However, this viral video was not created in 1956, but in 2020 using archival footage superimposed with today’s narrative. Observers spoke with the original creator of the satirical video to find out more.

Although the video has apparently only been shared in August and with 748 views on the Facebook page Plandemic TV, social media users have continued to resubmit it throughout October.

Of several different cuts of the viral video, the most shared version is a two-minute clip with footage from the mid-20th century accompanied by a voiceover by a male narrator reflecting on the future. After making a series of advance predictions, including “violent obesity” and “assembling an office’s many fixtures in a unit smaller than a loaf of bread,” he arrives at his most astonishing revelation. “Experts predict,” he says, “that by 2020, a new virus will rise, spreading from somewhere in Asia to the rest of the world.”

Many versions of the shared video indicate that it was made 64 years ago on February 29, 1956, and encourage the viewer to watch the last 45 seconds as the speaker makes his “prediction” about the future coronavirus.

However, a reverse video search using the InVid verification tool reveals the true origin of the video. The American verification medium Snopes found that several featured clips, including one with a house cleaning robot and another depicting an “overweight” man, were taken from the 1940 film “Leave It to Roll-Oh”. Another clip of a girl sneezing in a handkerchief turns out to be 1940s archive footage available via Getty Images.

Finally, the full viral video can be traced back to a four-minute YouTube video released on February 29, 2020 by RamsesThePigeon, a regular creator of satirical content on the platform. The original video, titled “1950s PSA: Avoid the Plague of the Future,” pretends not only to predict the future pandemic, but to provide instructions on how to avoid it. Before the video was announced, however, the video was cut for an advertisement about Doeskin Napkins also archival footage from 1954. Then we see the words “Footage Missing” followed by the final title.

The caption to the original video clearly states that the creator “acquired archive and public domain footage from archive.org” and that he “only threw this together because I wanted a video upload on February 29.”