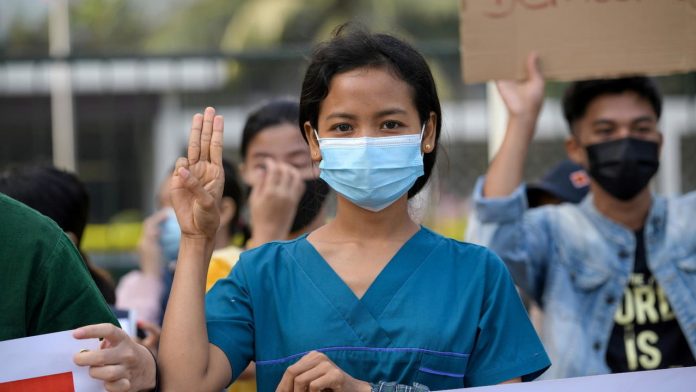 Thousands of people marched on anti-Myanmar protests on Monday as workers went on a nationwide strike demanding the release of ousted leader Aung San Suu Kyi and the return of democracy.

In the commercial capital of Yangon, more than 1,000 people gathered in a park in the middle of the morning and helped start a third rally day of rallying after last week’s coup.

“This is a working day, but we will not work even if our wages are reduced,” a protester, 28-year-old worker for the garment factory, Hnin Thazin, told AFP.

In Myanmar’s second largest city, Mandalay, over a thousand had also gathered by mid-morning.

And hundreds were seen in the capital Naypyidaw, riding motorcycles and honking car horns, while large rallies were also reported in other cities.

Over the weekend, tens of thousands of people gathered on the streets of Myanmar in the biggest protests since the coup.

Myanmar’s generals staged their coup by imprisoning Suu Kyi and dozens of members of her National League for Democracy in a rage before dawn on Monday last week.

The generals justified the coup by claiming fraud in the election last November, which the NLD won in a landslide.

The junta has declared a state of emergency for one year and promised to then hold new elections without offering any exact time frame.

The coup has sparked widespread international condemnation, although neighboring China has refused to criticize the generals.

US President Joe Biden has led calls on generals to relinquish power.

Pope Francis on Sunday also expressed “solidarity with the people of Myanmar” and called on the army to work for “democratic coexistence”.

Online calls to protest have led to bold challenges, including the nocturnal ear assessment of people hitting pots and pans – a practice traditionally associated with casting out evil spirits.

The rise of popular disagreement over the weekend overcame a nationwide internet block, similar in size to a previous shutdown that coincided with the start of the coup.

When the protests gathered, the junta also ordered telecommunications networks to freeze access to Facebook, an extremely popular service in the country and undoubtedly its main means of communication.

But on Sunday, Facebook video feeds from several cities continued as protesters marched through the streets.