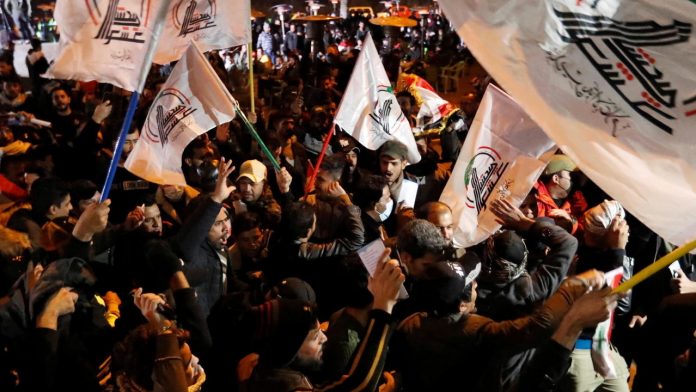 A mocking funeral procession marked the anniversary of the assassination of Iran’s supreme general and a leading Iraqi militia leader in a US drone strike that increased fears of a military escalation in the region.

Posters of the dead men adorned both sides of the road, which was lined with tents serving food and drink to those on the highway. The site of the bombing turned into a sanctuary-like area sealed with red ropes, with a photo of Soleimani and al-Muhandis in the center, as mourners lit candles.

Scraper marks were still visible on asphalt and walls in the area.

The procession came when the Iraqi military said that explosive experts with their naval forces managed to dismantle a mine that was discovered attached to an oil tanker in the Persian Gulf two days earlier.

The statement on Saturday said Iraqi authorities had launched an investigation into the incident. No group has taken responsibility for locating the mine.

Despite # COVID19, the Iraqis felt compelled to celebrate the martyrdom of General Qasem Soleimani, Abu Mahdi al-Muhandis and their comrades in the war against ISIS

They protested against the US occupation and reaffirmed the strong ties between Iraq and Iran pic.twitter.com/JXI8ivn2SA

The announcement came a day after Iraq confirmed reports from private security companies that a mine had been discovered attached to a tanker chartered by the Iraqi Oil Marketing Company, known as SOMO, as it was refueling another ship. It said Iraqi law was working to dismantle the mine.

Iraq has not provided further details, but the two private security companies said the discovery was likely a slippery slope on MT Pola, a tanker with the Liberian flag.

A limpet mine is a type of marine mine that attaches to the side of a ship, usually by a diver member of special forces. It explodes later and can significantly damage a ship.

The discovery came amid rising tensions between Iran and the United States in the last days of President Donald Trump’s administration.

The United States has already carried out B-52 bombings and sent a nuclear submarine to the Persian Gulf over what Trump officials describe as the possibility of an Iranian attack on the anniversary of the strike near Baghdad that killed Soleimani and al-Muhandis.