Home NEWS Thousands of Armenian civilians flee their homes as a result of a...
Facebook
Twitter
WhatsApp
Linkedin
LINE 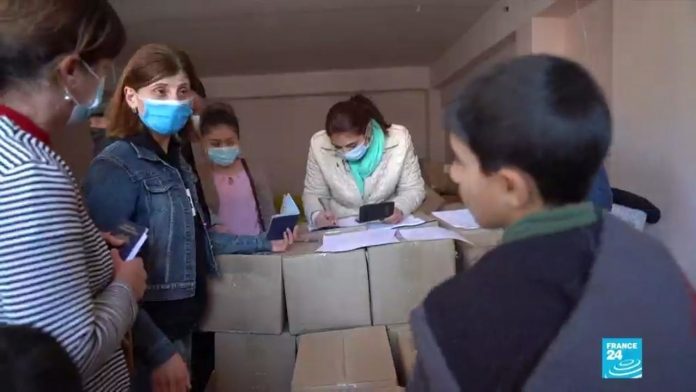 Some 100,000 Armenian civilians have fled their villages, homes and even loved ones in the wake of a Moscow-backed ceasefire demanding that Armenia relinquish control of certain areas in the Nagorno-Karabakh region.

Some refugees have found their way to makeshift centers where volunteers and aid workers offer support.

“They had to leave everything in the disaster,” said a woman who offered help. “They need everything – food, hygiene packages, even clothes – because winter is on its way.”

Many are still looking for a missing family and fear the worst.

One woman, Alla, told Jowharthat she had four children in the front line. The most important thing, she said, was to find them.

“Then we see what life has in store and how we continue to live.”

She fled with her daughter while she could, but her husband and their other children remained in Nagorno-Karabakh. Like many others, she found Armenians waiting across the border with open arms.

Among them is a woman who has opened her home to the refugees: “They have been with us since October 3. It is not very comfortable to sleep, it is not a five-star hotel, but they want for nothing.”

“We all live together. If we were in their position, they would do the same for us, she said.

The fate of the beer’s son is always in mind, as is their hometown of Shushi, which is now under Azerbaijan’s control.

“We hope we can go back to Stepanakert, maybe,” she said.