Home NEWS Thousands of Iraqis take to the streets to mark the anniversary of...
Facebook
Twitter
WhatsApp
Linkedin
LINE 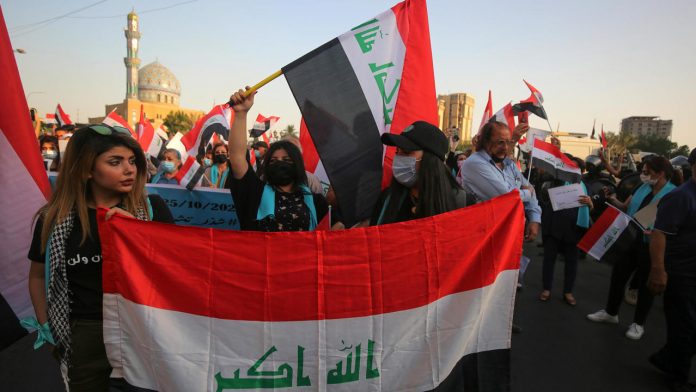 Thousands of protesters took to the streets Sunday to mark a year since mass rallies swept Baghdad and Iraq south, sparking calls for an end to the rampant corruption.

Protesters marched in the capital and several southern cities, including Najaf, Nasiriyah and Basra, to renew the demands proclaimed a year ago to end politicians’ corruption.

Mustafa Hussein, in his 20s, took part in the demonstrations last year and returned to Baghdad’s Tahrir Square on Sunday. He said little had changed.

“Our demands, which we wrote with the blood of our martyrs, are still on the lists of officials without implementation,” he said.

More than 500 people were killed during the months-long movement that began last year, many of whom were shot by Iraqi security forces using live ammunition and tear gas to disperse the crowds. In some cases, tear gas canisters hit the protesters’ heads, killing them instantly.

By February, the protests had erupted in the wake of coronavirus lockdowns and restrictions, prompting activists to reject mass marches and sit-ins.

An order from the Baghdad Operations Command, which oversees the security forces in the capital, prevented hundreds of protesters from entering the city on Sunday from the provinces of Babylon and Diwanieh.

In Baghdad’s Tahrir Square, which has been the epicenter of the protest movement, Iraqi youths carried banners with portraits of those killed by Iraqi security forces. The protesters set up tents and created their version of utopia filled with food vendors, cinemas and bookstores.

“Today we mark the memory of the October Revolution, especially the fallen,” said Fadel Ahmed, 25, a graduate in economics. “Our demands are against corrupt power parties and against the failed parliament.”

Last October, tens of thousands of Iraqis – mostly young people – marched in Baghdad and cities in the south to reject government implants, unemployment and poor services. Protesters took over public squares in Baghdad and camped for several months, refusing to leave until their demands were met.

The movement had early successes. The pressure from protesters leads to the resignation of Adil Abdul-Mahdi’s government. Mustafa al-Kadhimi took over the prime minister’s office after months of political stalemate, and after two former candidates failed to gain sufficient support among elites.

Al-Kadhimi has presented himself as a proponent of the protesters’ demands and appointed longtime activists to his close group of advisers. He promised that the early elections, an important demand of protesters, would be held in June next year.

Despite breakdowns from militias and the government, protesters say their movement is still alive.

“We only have this revolution to achieve our goals,” Ahmed said. “If it cannot, Iraq will be lost.”