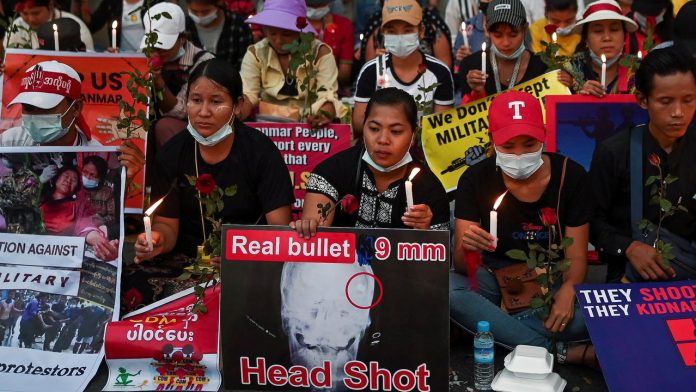 Myanmar junta warned against coup protesters that they could die but thousands of people took to the streets again on Monday, with tensions rising over the deaths of four protesters.

Much of Myanmar has been in uproar over the generals who rejected and detained civilian leader Aung San Suu Kyi three weeks ago.

Massive street demonstrations have taken place across the country, while a civil disobedience campaign has stifled many government agencies as well as businesses.

“Protesters are now encouraging the people, especially emotional teenagers and young people, to a confrontation path where they will suffer the loss of life,” a statement on state broadcaster MRTV said on Sunday.

The statement, which was read out in Burmese with the text of the English version on the screen, warned protesters to call for “riots and anarchy”.

The warning followed the deadliest weekend since the coup – two people were killed when security forces fired on protesters in the city of Mandalay, and a third man was shot dead in Yangon.

A young woman also died on Friday after being shot in the head during a protest and spending almost two weeks on life support.

They, the woman whose funeral was held on Sunday, were the first confirmed death in the protests, and she has emerged as a potent symbol of the anti-junta movement.

“Warning to the junta: Unlike 1988, security forces’ actions are being recorded and you will be held accountable,” he tweeted.

“We came out today to take part in the protest, to fight until we win,” said Kyaw Kyaw, a 23-year-old college student.

“We are worried about the pressure, but we will move on. We are so angry.”

In the urban area of ​​Bahan, protesters sat on a stretch of road, creating a sea of ​​yellow and red banners in support of Suu Kyi.

Yangon residents woke up to a heavy security presence, including police and military vehicles on the roads and a barricaded embassy area.

Markets and shops were expected to remain closed in solidarity with the protesters.

There were also demonstrations in the cities of Myitkyina and Dawei.

The protesters also rode the streets of Naypidaw, the capital, on motorcycles.

Myanmar’s generals have responded to the uprising by gradually increasing the use of force and the number of political prisoners.

According to the monitoring group Assistance Association for Political Prisoners, the authorities have imprisoned 640 people since the coup.

The targeted include railway workers, civil servants and bank staff who have resigned as part of the anti-coup campaign.

The junta also has severely limited access to the Internet overnight for eight consecutive days, according to the monitoring group NetBlocks.

Myanmar’s foreign ministry on Sunday justified its violence against protesters, accusing the UN and other governments of “blatant interference” in the country’s internal affairs.

“Despite facing the illegal demonstrations, incentives for unrest and violence, the relevant authorities exercise extreme restraint through minimal use of force to deal with the disturbances,” the statement said.

The United States, Canada and the United Kingdom have imposed sanctions on the generals who run Myanmar.

The United States warned again on Sunday of increased pressure.

“The United States will continue to take strong action against those who commit violence against the people of Burma as they demand the re – establishment of their democratically elected government,” US Secretary of State Anthony Blinken tweeted on Sunday.

The European Union’s foreign ministers are expected to meet on Monday to approve their own sanctions against Myanmar’s generals.