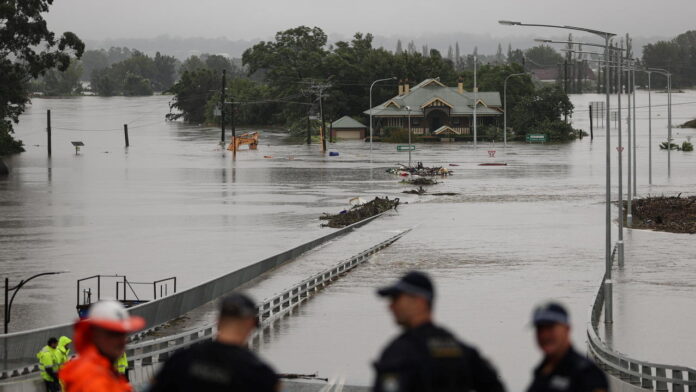 Heavy rains hit Australia’s southeast again on Monday, exacerbating once in a century floods that have forced thousands of people to evacuate their homes and closed hundreds of schools.

The day-long flood has flooded the coastal areas of New South Wales, the country’s most populous state, with parts of Sydney experiencing what officials predicted would be the biggest flood in decades.

On Monday, eight million residents were urged to avoid unnecessary travel and work from home if possible, as some hard-hit areas received 25 centimeters (10 inches) of rain in 24 hours.

Just over a year ago, the region was dehydrated: suffering prolonged drought, water restrictions and unsurpassed bush fires.

Researchers have warned Australia can expect to see more frequent and more extreme weather events due to climate change.

New South Wales Premier Gladys Berejiklian said about 18,000 people had been ordered to evacuate and 38 regions had been declared disaster zones.

“I do not know of any time in a state history where we have had these extreme weather conditions in such a rapid succession in the midst of a pandemic,” she said.

Rescue services have received at least 8,800 emergency calls and rescued hundreds of people from floodwaters since the crisis began.

The state’s Mid North Coast has been hit particularly hard and Berejiklian explains that the region had been hit by a “one in 100 years” disaster.

In Sydney’s vast Hawkesbury-Nepean Valley, swollen rivers were expected to peak at levels not seen since 1961, after the Warragamba Dam, the city’s largest drinking water source, was spilled over Saturday afternoon.

Residents of some affected areas were allowed to return to their homes Monday after the water receded, but others were on high alert as their regions were affected for the first time by rising water.

Authorities have warned of a potentially “life-threatening” situation, but so far no deaths or serious injuries have been reported.

“After going through three or four life-altering incidents, it can make you feel like you’re a turning point,” Berejiklian said.

“Please know that we think of you and get support as much as we can.”

Education authorities said more than 200 schools were closed, including some that had been damaged in the floods.

There were reports of homes and businesses being damaged as well, but Andrew Hall, CEO, Australia’s Insurance Board, said it was too early to understand “the extent of property damage in affected areas and to estimate insurance claims cover”.

Insurers had received more than 5,000 claims in recent days, he added.

The Bureau of Meteorology has warned of “treacherous” conditions on Monday before the wild weather is expected to ease later in the week.

Rainfall registers were recorded to continue to tumble in the coming days as the deluge spreads in the northwestern part of the state, and further north in the state of Queensland where flood warnings were also issued.

Health officials have said rain and floods will delay the already halting of coronavirus vaccines in Sydney and surrounding areas.

Australia will begin the first major public phase of vaccine distribution on Monday, although the program has fallen behind the government’s announced timetable due to delivery and delivery problems.