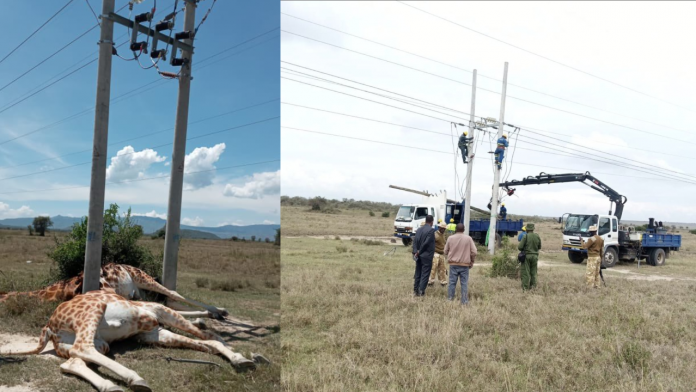 Three giraffes were killed after being electrocuted by low-hanging power lines at the Soysambu Conservancy in southwestern Kenya over the weekend of February 20. Photos of the giraffes published online sparked outrage from conservationists and Kenyan citizens, who demanded that Kenya’s electricity companies change the electrical infrastructure in the conservatory. On February 22, the engineers adjusted the power lines in hopes of preventing further damage to wildlife.

On Friday, February 19, two Rothschild giraffes were set on fire, while a third were found dead on Sunday, February 21.

The Rothschild’s giraffe is a rare subspecies found mainly in protected areas in Uganda and Kenya. As of 2018, the Soysambu Conservancy was home to 124 giraffes, most of them Rothschild. According to the Kenya Wildlife Service, there are 609 Rothschild giraffes in the country, almost half of the world’s population.

Although populations of this subspecies have recovered since being considered endangered in 2010, the Rothschild’s giraffe is vulnerable to illegal hunting, human interference and habitat destruction.

According to Jackson K. Kinyanjui, environmental researcher and founder of the non-profit climate change Kenya, the protection of Kenyan giraffe populations has important effects both economically and environmentally.

Since 2019, we have lost 11 Rothschild giraffes, but the last three actually caught our attention and caused some traction. We panic because we wanted to preserve them and now we are actually losing them. It is very important because it creates a lot of tourist attractions for our country, this is a huge income part of our country, a major contributor to our GDP. Having these giraffes here is a part of tourists who come to our country. The income we receive from conservatories helps to develop communities around them. If we do not protect these animals, we will lose revenue.

Apart from that, these giraffes are part of the ecosystem. Once the giraffes have been scrapped from the ecosystem, there would be an imbalance in the food chain. We need them to be there so that the ecosystem can stay in balance and so that biodiversity can actually continue to flourish.

According to the website Soysambu Conservancy, this is not the first time a giraffe has been killed by a power line in the park. Another was also electric in August 2018, the sixth giraffe killed by power lines in Soysambu in ten years.

Other animals have also been affected by power lines, including some bird species, according to Kinyanjui.

Apparently, the low-lying power lines that electrocuted three giraffes in Soysambu Ranch have also killed very many birds of prey in the area, as can be seen from these photos sent to me by a conservationist. pic.twitter.com/JcRh3XZ8oT

Birds of prey, eagles, even flamingos have been seen in these rows because they have no form of protection. Usually, there should be some kind of color or colored balls along the lines so that birds can see them.

Following these three recent giraffe deaths, the Kenya Power and Lighting Company investigated the incident and sent a team to raise the power lines at the site of the power outage.

We have completed the process to improve the cleaning of the electricity distribution infrastructure at the site for electrical support within Soysambu Conservancy. 1/3 pic.twitter.com/LpmzgltLp5

For Kinyanjui, however, it is not enough:

We do not want the lines to be lifted, we want these lines to be removed completely and to be laid underground or diverted completely from that conservatory. We do not need any kind of construction or human encroachment on any wildlife conservation parks. Raising the lines is not a cure. We do not want them to have anything to do with these protected areas. But it is cheaper to build through these conservatories.

According to a statement, Kenya Power and Lighting Company will conduct a review of its infrastructure within the Soysambu Conservancy and make changes to potentially harmful structures.