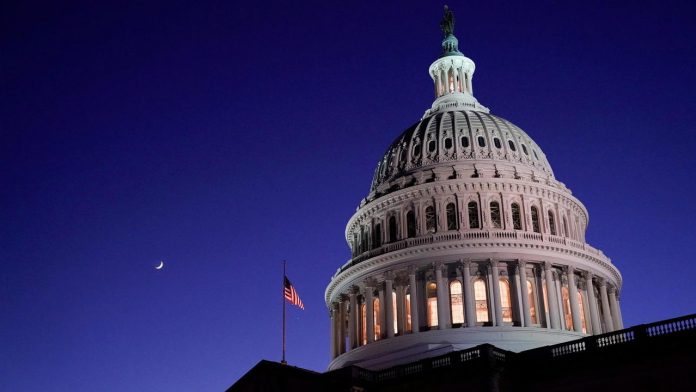 President Donald Trump on Friday signed a two-day piece of legislation to extend existing federal funding from Congress to avoid a government shutdown at midnight, as lawmakers negotiate a $ 900 billion pandemic bill and as part of $ 1.4 trillion in public spending expense package.

The House of Representatives and the Senate, with little debate and with only hours left before government funding expired, gave Congress leaders more time to try to draft a bipartisan COVID-19 support bill that would ride alongside the massive spending bill.

“I think all sides feel that we are making good progress on a major relief bill that would travel with a full year of appropriations,” said Senate Republican Leader Mitch McConnell, a Republican, just before the temporary bill was passed.

Trump signed the bill Friday night, the White House said, leaving lawmakers to try to hit a new Sunday midnight deadline, which comes almost exactly two years after an unresolved spending spree triggered a 35-day suspension by the government, the longest on record.

After months of party-political pointing and passivity, Republicans and Democrats have been negotiating intensively on what is expected to be the largest package since the spring to provide relief to a country battling a pandemic that kills more than 3,000 people a day.

With some support from Trump, who is leaving office on January 20, and Democratic President-elect Joe Biden, they have reported progress.

However, significant differences remain, including a dispute over a Republican-backed plan to curb Federal Reserve lending programs designed to alleviate the pandemic’s economic sting.

Other hotspots include relief for art spaces closed by COVID-19 restrictions and whether to include increased compensation from the Federal Emergency Management Agency to local authorities for things like personal protective equipment for schools.

However, many issues have been resolved. Coronavirus legislation is expected to include one-time checks for most Americans of about $ 600 each, extended unemployment benefits of $ 300 per week, assistance to states that distribute the vaccine, and assistance to small businesses fighting the pandemic.

The prospect of a government shutdown increased the pressure to come up with a relief plan. An extended suspension would force thousands more people out of work and disrupt services, just as the country would increase the distribution of coronavirus vaccines, even if the effects were not fully felt over the weekend.

“We have a government of two million people waiting every hour to find out if they should work,” Representative Steny Hoyer, the second-highest House Democrat, told reporters.

Congress was also called into action through an alarming increase in hospital stays and deaths. The United States’ death toll from coronavirus, now over 311,000, is by far the highest in the world, and many Americans – who do not receive state aid that is automatic in many other nations – are at risk of homelessness and starvation.

Biden has said that he wants COVID-19 relief for Americans to be passed immediately and promises to do more after he was sworn in on January 20.

Republicans also have a cautious eye on the consequences of passivity may have on a couple of runoff elections on January 5 in Georgia, which will determine whether their party retains control of the Senate for the next two years or hands it over to the Democrats.

Democrats say Republican Sen. Pat Toomey is promoting his plan to force the Fed’s emergency lending authority into an effort to make it harder for Biden’s future administration to deal with the public health crisis.

Toomey denied this and said that the lending authorities still went out.

Brian Deese, Biden’s choice to succeed Kudlow, said the relief bill should not include Toomey’s provision.