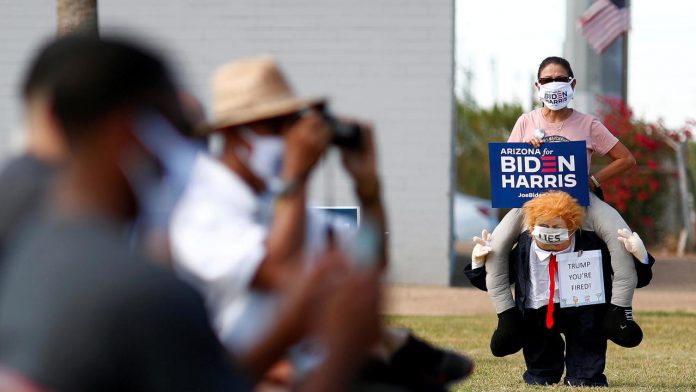 Donald Trump promised to disprove the polls again as he sprinted through five swing states on Sunday, while his opponent Joe Biden urged supporters to “take our democracy back” by voting in two days.

Last-minute scramble came as polls showed Biden maintained his overall lead – but with a bit of tightening in key states, including Pennsylvania, where he leads by four points, and Florida, now a roll, according to a RealClearPolitics average of polls.

With Americans galvanized by the effort, the election has already mobilized a record number of early voters.

“Look, we’re in Florida. We’re in Georgia … They say it’s a very close race in Texas. I don’t think so. They did that four years ago and I won in landslides.”

Snowstorms fell on Trump and the audience as he shook and joked repeatedly about the hard winds and the icy conditions.

He warned in a state that had long been dependent on production that Biden had “spent 47 years outsourcing your jobs, opening your borders and sacrificing American blood and tax in endless foreign wars.”

Biden and his wife Jill began the day with Mass at their Catholic church near their home in Wilmington, Delaware.

The former vice president spent the rest of the day in a neighboring state that is crucial to both men’s prospects: Pennsylvania.

At a rally in Philadelphia, Biden said, “In two days we can put an end to a presidency that has divided this nation.”

“It’s time to stand up, take back our democracy,” he said.

He also continued to hammer Trump over his handling of the coronavirus pandemic – which he called “almost criminal” in an earlier speech to supporters – after the country’s worst week for new cases ever, in which more than 1,000 Americans die daily.

Yet the president continues to pull away from the seriousness of Covid-19 – going so far as to accuse doctors of inflating the number of virus deaths for profit.

At its third meeting of the day in Hickory, North Carolina, Trump called on businesses and schools to reopen and shout signs of an improving economy – though economists say underlying factors do not bode well.

In an interview with the Washington Post published Saturday, Fauci said directly that without “a sudden change” in the nation’s public health practices, Americans are facing “a whole lot of evil in the future.”

But he praised the Biden campaign, which – unlike Trump’s mass rallies – follows health guidelines in its public events.

Fauci’s remarks prompted a scathing reprimand from White House spokesman Judd Deere, who called it “unacceptable” for Fauci to “choose three days before an election to play politics.”

Fears of tensions on election night and beyond, where the number of vote counts is expected to continue due to the large number of mail-in polls, were further encouraged by a report that Trump could declare victory premature.

Axio’s news site reported that Trump has told confidants that he would declare victory Tuesday night if it appears to be in front of him.

Trump called it a “false report,” but also reiterated his argument that “I do not think it is fair that we should wait long after the election.”

He has repeatedly claimed without proof that mail-in polls are open to fraud and warned on Saturday of “bedlam in our country” if no clear winner comes quickly.

Asked about the report, Biden said: “The president will not steal this election.”

In another sign of how unusual and tense the race has become, Biden also condemned the alleged harassment of one of his campaign buses by Trump supporters on a Texas highway – an incident that the FBI confirmed it was investigating.

The election is taking place in a deeply divided country with emotions so raw that arms sales have risen in some areas.

Businesses in some cities, including Washington, are boarding windows protectively, and police are preparing for the possibility of violence.

Trump started an exhausting Sunday plan with consecutive rallies in Michigan, Iowa, North Carolina and Georgia before an unusual at. 23:00 in Florida.

On Monday, both Trump and Biden are fighting again in Pennsylvania, which Trump won in 2016 by less than one percentage point. The president later returns to Michigan, and Biden reportedly adds a last-minute stop in Cleveland, Ohio.

Biden’s former boss Barack Obama, who has spellbound Trump in his appearances on the campaign path, is holding an election night in Miami, the campaign announced.

93 million early votes have already been cast, according to the non-partisan US election project.

In Trump’s 2016 victory, he was able to turn the important states around in Wisconsin, Pennsylvania and by a particularly narrow margin Michigan.

But polls show that Biden, despite his more cautious and reserved campaign style, is ahead there, while also pushing Trump on the back foot in traditionally conservative battlefields like Georgia and Texas.