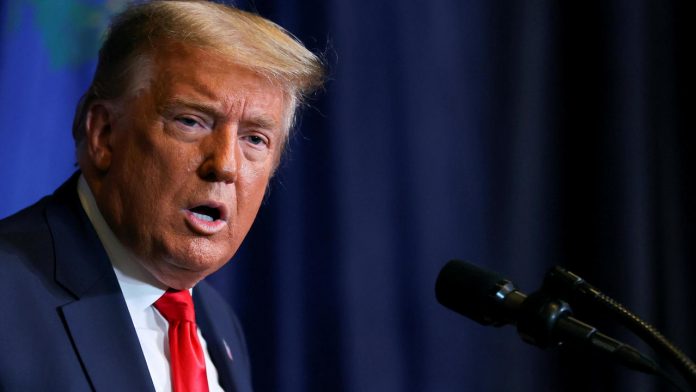 With the clock ticking, US President Donald Trump protected tens of thousands of Venezuelan migrants from deportation Tuesday night and rewarded Venezuelan exiles who have been among his most loyal supporters and who fear losing the same privileged access to the White House under the Biden administration.

Trump signed an executive order suspending for 18 months the removal of more than 145,000 Venezuelans at risk of being sent back to their crisis-torn homeland. He cited the “deteriorating situation” in Venezuela that poses a national security threat as a basis for his decision.

“America is still a beacon of hope and freedom for many, and now eligible Venezuelan citizens in the United States will receive much-needed temporary immigration assistance,” said Senator Marco Rubio, a Republican in Florida, in a statement praising the decision.

At the last minute – in stark contrast to Trump’s tough immigration policy over the past four years – it covered a hectic last day in office that also saw Trump issue a sweeping new round of economic sanctions targeting the alleged frontman of Venezuelan leader Nicolas Maduro and tightens controls to keep espionage technology out of the hands of the Venezuelan military.

But before Joe Biden’s inauguration on Wednesday, much more attention was focused on the elected president’s choice to be secretary of state, Antony Blinken, who during his US Senate confirmation hearing in Washington showed continued support for Venezuelan opposition leader Juan Guaidó.

Blinken said in his initial comments about Venezuela that he would continue to recognize Guaidó as Venezuela’s interim president, stating that he has no illusions about a possible dialogue with Maduro, whom he called a “brutal dictator.”

The veteran diplomat still expressed frustration over the results of the current US strategy, which has not shaken Maduro’s grip on power or led to free and fair elections. He said there was room for fine-tuning sanctions and better coordination with allied nations to restore democracy to the crisis-stricken South American nation.

“The difficult thing is that for all these efforts, which I support, we have obviously not got the results we need,” Blinken said.

The Trump administration was the first of more than 50 countries in the world to recognize Guaidó as Venezuela’s president shortly after the young lawmaker emerged to challenge Maduro’s government two years ago. Secretary of State Michael Pompeo spoke by telephone with Guaidó on Monday, expressing his “personal respect and appreciation” to the opposition leader for his “commitment to freedom of speech,” the State Department said in a statement.

Venezuela, a once-rich oil-producing nation, has in recent years fallen into an economic and political crisis that has seen a flood of more than 5 million residents flee from a breakdown in public services and shortages including shortages of running water, electricity and petrol.

Most have migrated to other parts of Latin America. But an estimated 350,000 are believed to live in the United States, and about 146,000 of them have no legal status, according to the Center for Migration Studies in New York.

More than 700 Venezuelans have been removed from the United States since 2018, while 11,000 more are under deportation proceedings, according to TRAC’s immigration database at Syracuse University.

For years, Venezuelans, with bipartisan support, have demanded so-called temporary protection without effect as Trump has sought to end the program for migrants from six other countries, including Haiti, Nicaragua and El Salvador.

Trump’s order provides similar protection, including protection against deportation and the right to work, but was still met with opposition from some Democrats who want Biden to introduce legislation that provides additional protection.

“Our society will no longer be deceived and used for political games,” said Leopoldo Martinez, the first born in Venezuela in the Democratic National Committee.

In the latest round of sanctions that tried to push Maduro out, the US Treasury Department imposed sanctions on three people, 14 companies and six ships. All are accused of helping the Venezuelan state oil company PDVSA avoid previous US sanctions aimed at preventing the president from benefiting from crude sales.

The sanctions target people and companies linked to Alex Saab, a Colombian businessman who US officials say is Maduro’s primary responsibility for everything from food imports to exports of the country’s crude oil. Saab was arrested on a US order last year in the African nation of Cape Verde over what Maduro says was an official mission to Iran to buy goods. He is now fighting for extradition to Miami, where he faces corruption charges.

Maduro’s government blew up the sanctions as another “imperialist aggression” aimed at destroying Venezuela’s ability to meet its own needs through oil sales after four years of attacks by the Trump administration.

The US Department of Commerce also announced measures on Tuesday to block US technology from being used by military intelligence in countries such as China, Cuba, Russia and Venezuela.

Such harsh measures have become an almost routine feature of the outgoing administration’s harsh stance on Venezuela, which has proved popular with exiled Latin voters in Florida.