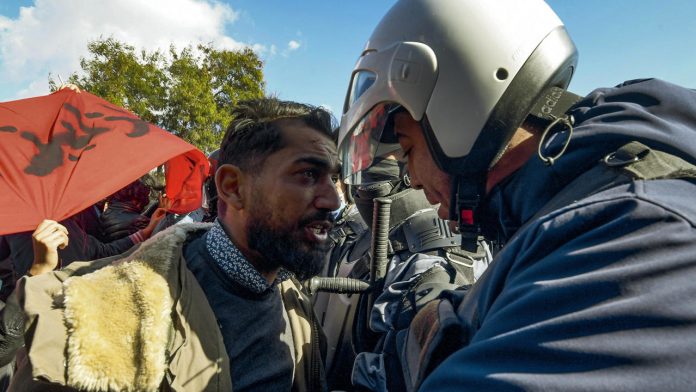 Tunisia’s riot police fired water cannons at protesters outside the heavily barricaded parliament on Tuesday, trying to quell the biggest demonstration since demonstrations began this month over inequality and police abuse.

Hundreds of protesters had marched from the Ettadhamen district of the capital Tunis, where young people have clashed with police several nights this month and been joined by hundreds of others near parliament.

The police blocked the march to the barricades to prevent protesters approached the Parliament building, where lawmakers held a tense debate on a controversial government reorganization.

“The government that only uses the police to protect itself from the people – it has no more legitimacy,” said a protester, Salem Ben Saleh, who is unemployed.

Later, police also barred Avenue Habib Bourguiba, the broad tree-lined boulevard that is the Interior Ministry’s home and where large protests have traditionally taken place, when demonstrators tried to gather there.

Protests erupted earlier this month on the 10th anniversary of the 2011 Tunisian revolution that inspired the Arab Spring and introduced democracy in the North African country.

Political paralysis and economic decline have soured many Tunisians on the fruits of the uprising.

The political stalemate in Tunisia since the 2019 elections has hampered efforts to address economic problems, with both foreign lenders and the main trade union calling for reforms.

Last year, when the global coronavirus pandemic hit, Tunisia’s economy shrank by more than 8%. The budget deficit rose above 12% of gross domestic product and ballooned government debt to more than 90% of GDP.

The nightly clashes between youths and police have been matched by growing daytime protests in which protesters have chanted slogans, including “the people want the fall of the regime” – echoing uprisings from the Arab Spring.

Riots continue in Tunisia after the wave of arrests

On Tuesday, with anger over Monday to a young man whose family said he had been hit by a tear gas canister, protesters shouted at the security forces.

In Sbeitla, the hometown of Haykel Rachdi, who was buried on Tuesday, mourners later collided with the police, witnesses say.

When the parliamentary debate on the change paused in the afternoon before a vote was expected in the evening, some legislators in the opposition left parliament to join the protest outside.

If Parliament supports Mechichi’s new government, it could put him on the road to a major deal with President Saied, complicating the government’s efforts to review the economy.

“Mechichi has turned this into a police state … No work, no development, no investment, just police against the people,” said Imed, another protester who did not want to give his family name.