Home NEWS Tunisians are protesting to celebrate the anniversary of the assassination of left-wing...
Facebook
Twitter
WhatsApp
Linkedin
LINE 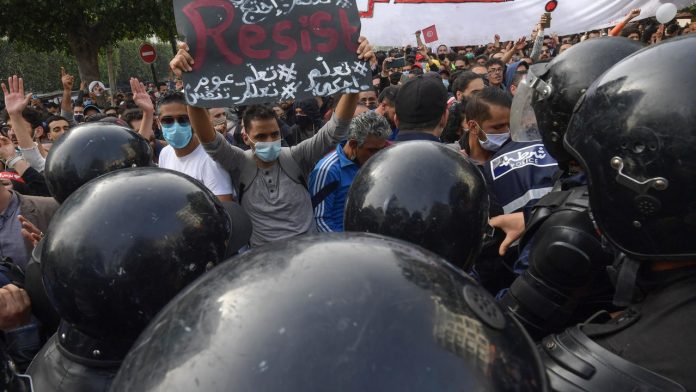 Thousands of Tunisians pushed through a heavy security cordon and marched down the main road in their country’s capital on Saturday to mark the eighth anniversary of the killing of a left-wing political leader.

The killing of Chokri Belaid on February 6, 2013 outside his home and the killing of another left-wing leader Mohammed Brahmi six months later plunged Tunisia into chaos. No one has been convicted in either case.

No more fear, no more terror. The street belongs to the people, ”chanted the participants in the anniversary event as they defied the police to march from a square named after Belaid to Tunis’ blocked main artery, Avenue Bourguiba.

The leader of the Labor Party, Hamma Hammami, blamed the Islamist party Ennahda, which led the Tunisian government at the time of the anti-Islamist Belaid. Hammami claimed in a statement that the party has continuously stumbled and slowed down the legal process in the case.

Tunisia developed into a deep political crisis following the two murders in 2013. Four civil society organizations, known as the Tunisian National Dialogue Quartet, were awarded the 2015 Nobel Peace Prize for their work in stopping the dangerous frenzy in the North African nation.

Tunisia’s revolution in 2011 triggered the pro-democratic events, known as the Arab Spring, and was considered the country with the best chance of realizing democratic change until the crisis that followed the killings. Many of the other countries that saw pro-democratic uprisings during the Arab Spring are heading for chaos or renewed authoritarianism.