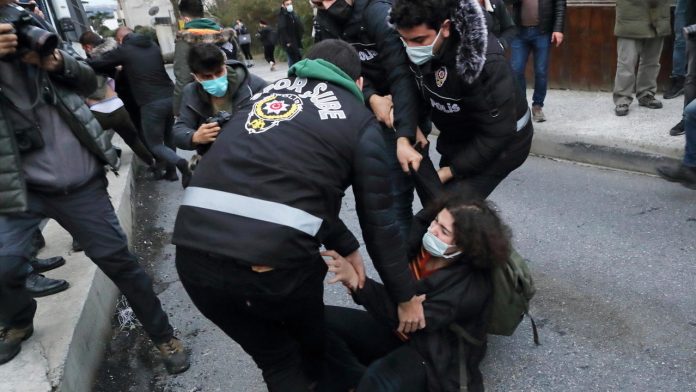 Four people were arrested over the weekend for depicting Islam’s holiest site with images of the LGBT rainbow flag during a demonstration at Istanbul’s Bogazici University.

And shortly after Erdogan’s TV speech on Monday, a new rally broke out at the same school with dozens of people detained and social media showed that the police were removing students who had protested peacefully.

“We will take our youth to the future, not as LGBT youth but as youth who were in our nation’s glorious past,” Erdogan said in a video link with members of his ruling AK Party.

“You are not LGBT young people, not young people who commit vandalism. On the contrary, you are the one who repairs broken hearts.”

Rights groups accuse Erdogan of taking the most Muslim but officially secular country on an increasingly socially conservative course during his 18 years in power.

Homosexuality has been legal throughout the history of modern Turkey.

But homosexuals often face harassment and LGBT events – including Istanbul Pride – have been blocked under Erdogan.

Turkey was hit by a wave of student protests last month after Erdogan appointed a loyalist to head Bogazici University.

During a demonstration on Friday, protesters hung a work of art opposite the new principal’s office showing the holy site in Mecca and images of the LGBT movement’s rainbow flag.

Turkish police accused four people of “encouraging hatred of the population”. Two of them have been arrested and the other two are placed under house arrest.

Groups of students demonstrated again at Bogazici University on Monday despite the presence of hundreds of riot police and demanded the release of the four and the rector stand down.

AFP reporters saw several students being dragged away by police and the governor of Istanbul later confirmed that 159 people had been arrested.

Further afield in the Aegean resort of Izmir, posts on social media showed police officers struggling with a small group of rainbow-flagged students.

The meetings echo the 2013 protests that erupted against plans to demolish a park in Istanbul before spreading nationally and present a direct challenge to Erdogan’s government.

Last month, Erdogan accused some of those who took part in the student demonstrations of being “terrorists”.