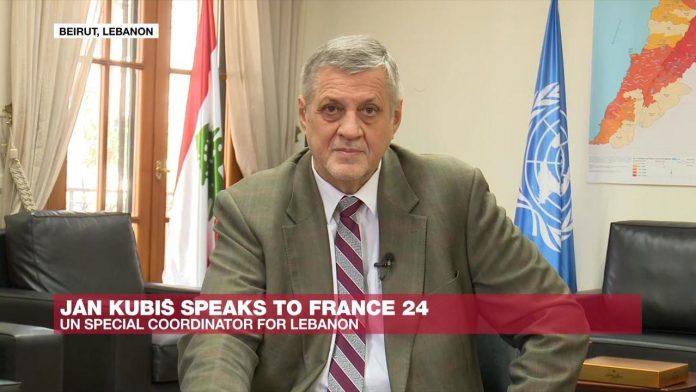 In an interview with FRANCE 24, UN Special Coordinator for Lebanon Jan Kubis lamented the absence of a functioning government in the country despite promises from key political parties to quickly form one in the aftermath of the deadly Beirut bombing on 4 August. Kubis said he hoped a government would be formed “within a few days, definitely not weeks”.

The UN Special Coordinator for Lebanon regretted that 100 days after the devastating explosion in the port of Beirut, there were worrying signs that the investigation promised by the Lebanese authorities was not progressing. He said that this lack of accountability further increased the distrust of the Lebanese people. However, he hoped that the participation of foreign experts in the probe would “give credibility to the whole exercise”.

Kubis also lamented the country’s lack of a functioning government despite promises from key political parties to quickly form one in the aftermath of the explosion. Last month, President Michel Aoun asked Saad Hariri, a former prime minister, to form a new government after former PM-appointed Hassan Diab threw in the towel.

The UN’s top diplomat said he had briefed the UN Security Council on the lack of progress and that the UN body had strongly urged key Lebanese political actors to move things forward.

Kubis warned that if the political vacuum continues, Lebanon could face a “humanitarian catastrophe” and even a “collapse”. He said the top foreign officials had passed on the message to the country’s politicians that they could not just wait for foreign donors or powers to come to the rescue but had to find a way forward.

The UN’s top diplomat added that the recent US sanctions imposed on leading Lebanese politician Gebran Bassil should not serve as an excuse to delay the formation of a government. He concluded by saying that he hoped that one would be formed within “days, definitely not weeks”.