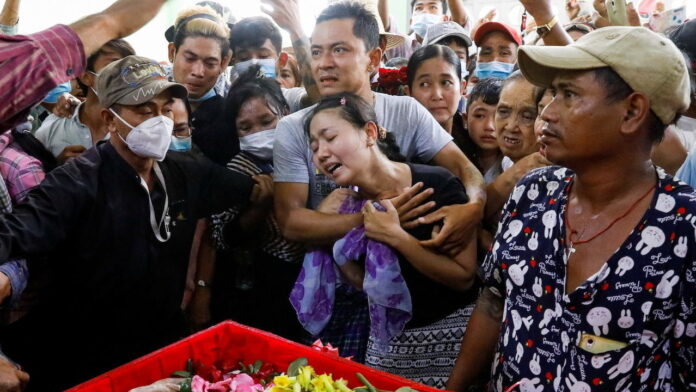 Myanmar’s military is likely to commit “crimes against humanity” in its attempt to stay in power, a UN expert said on Thursday, when the junta claimed that the dismissed civilian leader Aung San Suu Kyi accepted illegal payments of cash and gold.

At least 70 people have reportedly been “murdered” since the coup on February 1, says Thomas Andrews, the UN’s top expert on rights in Myanmar.

The country is “controlled by a murderous, illegal regime” that probably committed “crimes against humanity”, Andrews told the UN Human Rights Council in Geneva.

While stressing that such crimes can only be decided in a court of law, he said there was clear evidence that junta’s crimes were “widespread” and part of a “coordinated campaign”.

Diplomatic pressure has been built on the generals, who have tried to quell daily protests by force.

On Wednesday, the United Nations condemned the junta’s aggregation, in which more than 2,000 people have been arrested, even by traditional Myanmar’s allied China, which demands “stripping down” and dialogue.

The military – which is defending its takeover with reference to alleged irregularities in the November vote in which Suu Kyi’s party won – held a rare press conference accusing the civilian leader of corruption.

“We have learned that Daw Aung San Suu Kyi himself took these $ 600,000 and seven withers (11.2 kg) of gold. The Anti-Corruption Commission is investigating, said Zaw Min Tun.

Nobel Peace Prize winner Suu Kyi, who has been detained since the coup, faces other criminal charges, including owning unlicensed walkie-talkies and violating coronavirus restrictions by hosting a 2020 campaign event.

The state newspaper Mirror announced on Thursday that the Arakan Army (AA) – which fights for autonomy for the ethnic Rakhine people in the northern state of Rakhine – is no longer considered a terrorist organization.

AA has been fighting the army for several years, with hundreds killed and about 200,000 civilians forced to flee their homes.

“Tatmadaw has many enemies, they do not want to operate on too many fronts at once and the most pressing front at this time is against the ethnic Burman majority in the major city centers,” he told AFP.

“They used sound bombs on every street,” said one resident.

Another part of Yangon, northern Okkalapa, rolled after 300 arrests on Wednesday, according to the monitoring group Assistance Association for Political Prisoners.

On Thursday, tougher measures were taken against protesters, with nine killed, six of them in central Myanmar’s Myaing township.

“Six men were shot dead while eight people were injured – with one man in critical condition,” a rescue worker told AFP.

A witness said five of them were shot in the head.

In Bago, a city northeast of Yangon, Zaw Zaw shot Aung, 33, who is deaf, in the head, his father Myint Lwin told AFP.

“As a father, I am deeply saddened by his death,” he said.

A rescue worker told AFP that a 30-year-old man was killed in Mandalay, Myanmar’s second largest city and two more people were injured.

“We could not pick up his dead body because rescue teams are being targeted even these days,” he said.

There was also a death in Yangon’s northern Dagon, where Chit Min Thu, 25, died after being shot in the head.

“I was recently told that his wife is two months pregnant,” his mother Hnin Malar Aung told AFP.

“No one will be at peace until this situation ends. They were so cruel to my son. I never expected my son to be shot in the head … I’m worried about all the unarmed youths, they’ll be in trouble. ”

A man who was injured eight days ago in Monywa in central Myanmar died of his injuries on Thursday and a 26-year-old bank worker from Myingyan who was shot on Wednesday also lost his life.

A report by Amnesty International has accused the military of using “battlefield weapons” on unarmed protesters and carrying out delayed killings.

The group cataloged the security forces’ use of firearms that are “completely unsuitable for use in police protests”, including sniper rifles and semi-automatic rifles.