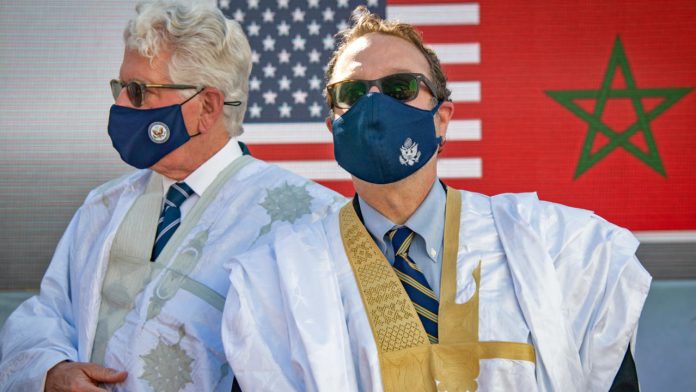 The United States on Sunday began “the process of establishing” a consulate in the disputed Western Sahara, after Washington recognized Morocco’s sovereignty there in exchange for Rabat’s normalizing ties with Israel.

US Ambassador David Fischer visited the port of Dakhla, 1,440 kilometers southwest of Rabat in the far south of Morocco-controlled Western Sahara, to mark the start of a diplomatic office.

“It is such an honor for me to visit this amazingly beautiful and critically important region of Morocco, and to begin the process of establishing a US diplomatic presence here,” Fischer said, according to the US Embassy.

Western Sahara is a disputed and fragmented former Spanish colony, mostly under Moroccan control, where tensions with the independent Polisario front have been simmering since the 1970s.

Last year, Morocco joined the United Arab Emirates, Bahrain and Sudan and agreed to normalize ties with Israel, according to US brokers.

In return, US President Donald Trump fulfilled a decades-old Moroccan goal by supporting his disputed sovereignty over the barren but phosphate-rich region, which lies next to important Atlantic fishing zones.

Foreign Minister Nasser Bourita said on Sunday that “Morocco is feeling stronger in its legitimate struggle for its territorial integrity … with the support of its friends.”

The Algerian-backed Polisario Front fought an independent war from 1975 to 1991 and controls about one-fifth of the desert area.

The UN peacekeepers in Western Sahara have a mandate to organize a referendum on self-determination for the region, and despite Washington’s moves, the UN insists that its position is “unchanged”.

In November, the Polisario announced that a 1991 ceasefire was considered invalid, after Morocco sent troops to a UN-patrolled buffer zone to resume a key road.

Fischer, who on Sunday called the visit “another historic milestone in more than 200 years of friendship” between Morocco and the United States, was accompanied by Deputy Foreign Minister David Schenker.

In December, the US State Department opened a “virtual” diplomatic post in Western Sahara before “finding a suitable place” to build a consulate.

The building is expected to be completed in the coming months, Fischer added.