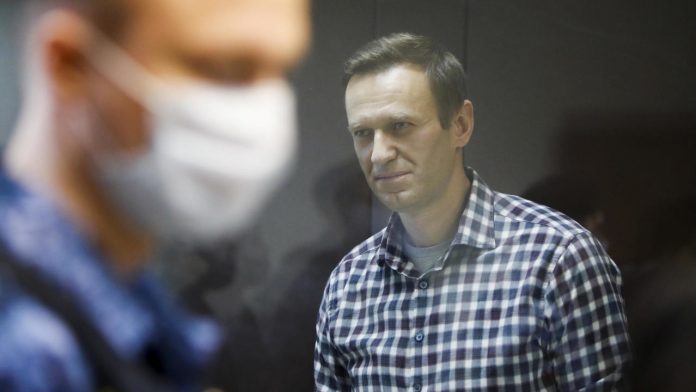 On Tuesday, the United States imposed sanctions on senior Russian officials in a coordinated operation with the European Union when the US intelligence service concluded that Moscow was orchestrating the almost deadly poisoning of imprisoned Kremlin critic Alexei Navalny.

In its first major crackdown on Russia since taking office, President Joe Biden’s administration said it was freezing all US assets and criminalizing transactions with seven Russians, including the FSB’s security services.

The US intelligence service judged “with high confidence” that FSB officials, successors to the KGB, poisoned Navalny with the nerve agent Novichok on August 20, 2020, a US official told reporters.

Navalny was flown to Germany for treatment but returned defiantly in January, only to be arrested and then sent to a penal colony after straining massive meetings through his allegations of corruption by Putin.

“The US government has exercised its authority to send a clear signal that Russia’s use of chemical weapons and human rights abuses have serious consequences,” Foreign Minister Antony Blinken said in a statement.

“We reiterate our call on the Russian Government to release Navalny immediately and unconditionally,” he said.

The announcement comes a day after the EU countries approved a new round of sanctions for the treatment of Navalny. The bloc had already in October addressed the FSB chief, Alexander Bortnikov, among others on the American list.

Officials recently targeted on Tuesday by both the United States and the European Union included Alexander Kalashnikov, the administrator of Russia’s prisons.

The US Department of Commerce said it also blacklisted 14 export control companies or entities for fear they could help Russia develop chemical weapons.

The Kremlin has denied responsibility for Navalny’s ill health and on Tuesday asked the Western powers what they would achieve through sanctions.

“The answer will be obvious: such a policy does not achieve its goals,” said Kremlin spokesman Dmitry Peskov.

Foreign Minister Sergei Lavrov spoke with his Uzbek counterpart and warned of reprisals, saying that a rule of diplomacy “is the principle of reciprocity.”

The Biden administration has promised to work more closely with allies and to take a harder line than defeating President Donald Trump, who expressed admiration for Putin despite signing certain sanctions against Russia.

The Biden team has also made it clear that it is not seeking another “recovery” in relations of the kind originally attempted by former President Barack Obama.

Officials said the United States would also conduct intelligence assessments of other concerns with Russia in the coming weeks.

The lines include allegations that Russia paid Taliban-linked militant bounties to kill US troops in Afghanistan, and early indications that Moscow was behind the massive SolarWinds hack that destroyed US agencies and companies.

Navalny, 44, became violently ill when he took a domestic flight.

The doctors who treated him in Germany said he had been poisoned with Novichok, a nerve agent developed by Soviet researchers and who was also accused of an attack in England in 2018 against the Russian double agent Sergei Skripal and his daughter Yulia.

Navalny was sent to a penal colony east of the Russian capital after a judge ruled that when he went to Germany, he violated the terms of a temporary sentence due to a fraud case in 2014, which critics say was trumped.

Navalny has remained in Putin’s needle and released a viral video claiming to show a palace in the Black Sea belonging to the president, who was forced to publicly deny that it was his.

The dissident has also mockingly said that the Russian veteran leader “will go down in history as a poisoner of panties” – where agents allegedly place Novichok.