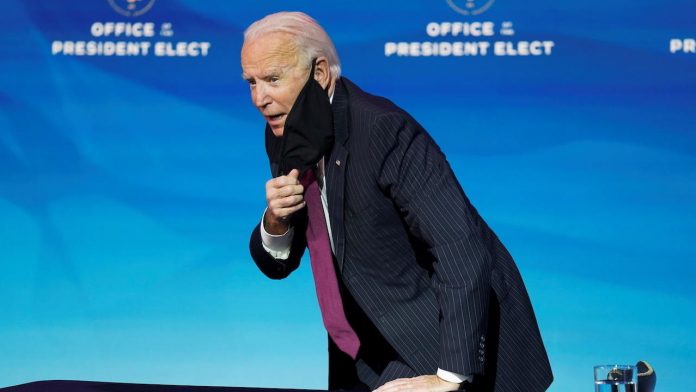 President-elect Joe Biden will receive the coronavirus vaccine as soon as next week, transitional officials said on Wednesday as U.S. authorities try to build public confidence in a measure that promises to stem the deadly pandemic.

Both men will get the shot publicly in an effort to boost confidence in vaccine safety, which will be widely available to the public next year.

President Donald Trump will get the vaccine himself as soon as his medical team decides it is best, White House Press Secretary Kayleigh McEnany said on Tuesday.

Initial doses of the vaccine, which became available this week, have been set aside for frontline doctors, nurses and other health care professionals, along with residents and nursing home staff and some U.S. authorities.

U.S. officials are aiming to receive 2.9 million doses of the vaccine, developed by Pfizer Inc and German partner BioNTech SE, by the end of the week.

At least 304,187 Americans have died from the disease, according to a Reuters report, and 16.7 million have been infected – about 5% of the population.

The news comes when Biden builds his incoming administration before he takes office on January 20.

On Wednesday, he introduced former presidential rival Pete Buttigieg on Wednesday as his choice for the US Secretary of Transportation to take the lead in upgrading America’s aging infrastructure.

Buttigieg, the former mayor of South Bend, Indiana, would be the first openly gay secretary of state to be confirmed by the Senate if approved.

Performing with Buttigieg in Wilmington, Delaware, Biden said the 38-year-old would face the task of restoring what he called “our crumbling roads, bridges and ports.” Biden has proposed a huge increase in infrastructure spending.

“I am also aware that the eyes of history are on this appointment, as I know it is the first time a US president has ever sent an open LGBTQ government member to the Senate for confirmation,” Buttigieg said.