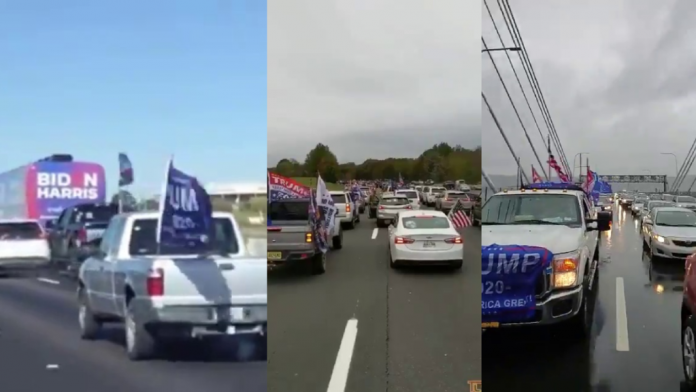 As U.S. voters go to the polls on Nov. 3, threats of voter repression and intimidation have been widely shared in the media and on social networks. This year, voters are navigating threats of militia mobilization, outdoor gatherings near polling stations and highways blocked by cars waving flags. Jowharobservers spoke with Damon Hewitt, executive vice president of the Law Committee on Civil Liberties, to talk about the biggest threats to fair voting in the United States this year.

The Bar Association manages hotline 866-OUR-VOTE, the largest non-partisan hotline in the United States. Since July, they have received more than 100,000 calls, twice as many as usual in an election year.

Hewitt estimates that this increase is due in part to changes in voting procedures during the Covid-19 pandemic:

We see many calls that have to do with confusion about absence or voting by mail because the rules are changing. There are ongoing lawsuits from people who want to limit democracy by limiting how many people can vote, or what their options are to vote, or how they can cast their vote. We also get calls about potential cases of voter intimidation where people have long rifles at polling stations or inappropriate police presence in some cases. The weekend before Election Day in the United States was marked by a visible mobilization from supporters of US President Donald Trump. Highway convoys were seen in several U.S. cities.

In Texas, Trump supporters used their vehicles to enclose a Biden campaign bus on October 31st. An official from the Biden campaign reported that the convoy was trying to “slow down the bus and drive it off the road,” a claim that is currently under FBI investigation.

Videos of the convoy have been widely shared online, with many Trump supporters claiming the bus was trying to push the surrounding cars off the road.

A video posted to Twitter on Oct. 31 shows a group of vehicles carrying Trump flags around a Biden campaign bus on a Texas freeway.

On November 1, highways in New York and New Jersey were blocked by caravans of vehicles emblazoned with “Trump 2020” flags.

These mobilizations of supporters have led many Americans to question what kind of behavior is appropriate when voters go to the polls. On October 20, a Miami police officer was disciplined for wearing a “Trump 2020” face mask to a polling station while in uniform. Meanwhile, several reports of intimidation have emerged from so-called “voting watchdogs” after Trump asked his supporters to “look very carefully” at the polls.

According to Hewitt, these actions can affect voters even if they are not in the immediate vicinity of polling stations.

For voters to see that kind of presence on the way to a polling station, it can certainly be scary. It gives you a sense that someone has eyes on you and they mark who you are. We have heard cases during early voting of people who said that there were some at the ballot box who wrote notes on every single movement, maybe even took photographs or took videotapes. And, of course, it makes people uncomfortable that they are being attacked in some way.

Polling monitors, and even polling challengers, are perfectly legal in many different states. The question is, do they play by the rules? There will always be some who go beyond the rules and their purpose is to intimidate.

While some voter intimacy tactics are more subtle and indirect, there have been more explicit threats this election cycle. A right-wing militia group known as the Oath Keepers has promised to “protect Trump” at polling stations on election day. In Florida, reports of armed Trump supporters near a polling station have also raised concerns. We certainly heard a call for militia groups to be present and hold some sort of rally near the polling stations. We see all kinds of chaos out there. Fortunately, this is not a sign of anything that is deeply coordinated and widespread to the point where it will succeed. But the rhetoric we hear in national discourse actually encourages this type of people to test their luck to the detriment of voters.

The militia groups have existed for some time, but this year, more than other years, they themselves have some increased activity in terms of elections. We have seen calls for rallies across the country by certain groups who want to have a physical and personal presence that really has no purpose other than to intimidate other people and other voters. They may consider this as their last gasp of an opportunity to spread their hatred and make it take some sort of effect before election day.

According to Hewitt, the voter’s scary tactics can actually end up having the opposite of their intended effect: We know [in the United States] that intimidation of voters and exemption from voting is nothing new. It has been a long, long time. And as long as it has taken place, it has been very gendered and very racist for over 100 years. The part of the electorate that is most likely to encounter intimidation tactics is also the part of the electorate that is perhaps most motivated to vote. What we think the effect of this scary tactic is not to interrupt the vote, but to actually have another effect, to actually have an uptick in voter engagement, voter turnout, and actual voting. That is what we are hoping for. This article is written by Pariesa Young