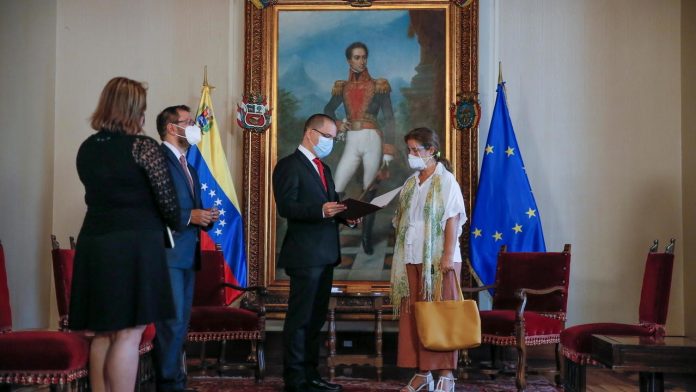 On Wednesday, Venezuela expelled the European Union ambassador to Caracas in response to new EU sanctions against top officials, giving her 72 hours to leave the country, a move that led to a swift condemnation of the EU.

EU spokeswoman Nabila Massrali replied later on Wednesday: “The EU deeply regrets this decision, which will only lead to further international isolation of Venezuela. We demand that this decision be reversed. ”

“Venezuela will only overcome its ongoing crisis through negotiations and dialogue, in which the EU is fully committed but which this decision directly undermines,” she said.

The Venezuelan National Assembly, controlled by Maduro’s party, on Tuesday called on the government to expel the ambassador a day after EU foreign ministers agreed to sanction 19 Venezuelan officials for “undermining democracy” and human rights abuses.

The relocation led to 55 the total number of members of Maduro’s regime focused on asset blocking and travel bans.

The EU expanded the list after rejecting a legislative election in December in which Maduro won total control of parliament following an opposition boycott.

The election results were not recognized by the EU, the US or several countries in Latin America.

The recently sanctioned officials include two members of the National Assembly, the governor of the state of Zulia, the commander of the armed forces and three members of Venezuela’s electoral assembly, including its president.

“Hopefully it will be reflected in the European Union, hopefully we will be able to build the bridges between understanding, dialogue, hopefully they will learn to respect,” he said.

On July 29, following an earlier round of European sanctions, Maduro had also declared Brilhante Pedrosa persona non grata and gave her 72 hours to leave the country. When the deadline expired, however, the government backed down.