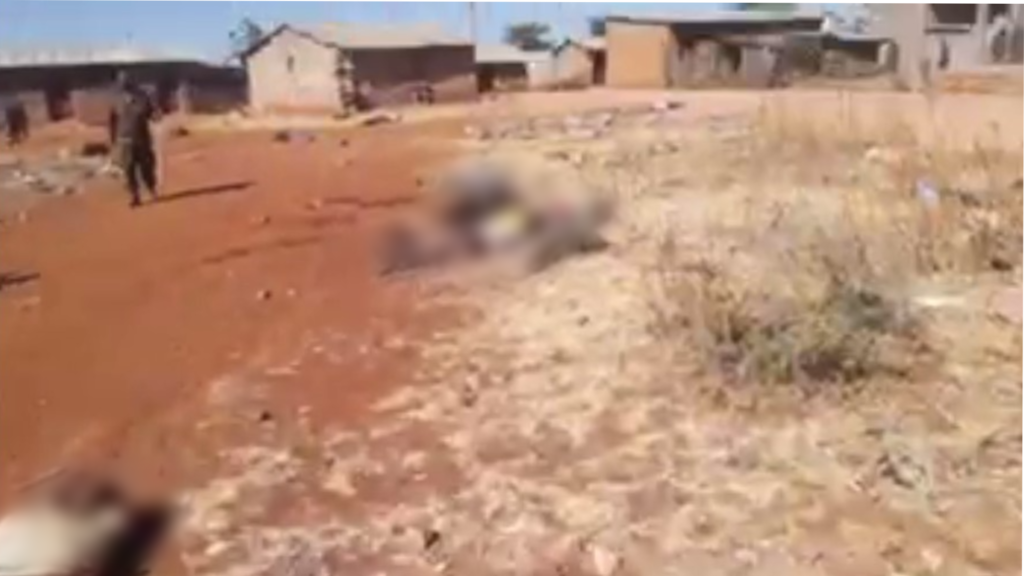 Dozens of men slaughtered dozens of people in a small village in the Tigray region of Ethiopia on January 5, 2021, in the midst of the usually festive Orthodox Christmas period. Thirty bodies are seen on the ground in a video that has been circulating online despite the current internet blackout in the Tigray region, which has been engulfed by a bloody conflict between the army and the rebels. The soldier who filmed the video points the camera at an injured person and says to a comrade: “You should have finished the survivors!” Our team was able to verify this video.

WARNING: Readers may find the content of this article disturbing

The Tigray region, which is located in the far north of Ethiopia, has been engulfed in a bloody struggle between the central government and the regional government, which wants more representation and political power for the Tigray minority within the government.

Last November, this conflict escalated into a direct war after much-anticipated elections were delayed. This led to a humanitarian catastrophe. Shelling in residential areas saw that a large number of people were displaced. The chaos also led to famine.

Tensions also arose when thousands of Eritrean soldiers joined the Ethiopian central government against Tigray’s regional government. This is the result of a complex story. Eritrea and Ethiopia were at war for 30 years. During this war, Ethiopia was led by a government in which the Tigrayan minority and the Tigray People’s Liberation Front had enormous political power. But they lost power in 2018 when Abiy Ahmed was appointed prime minister.

In early February, a video of 4’04 “was broadcast on social media – initially published as a series of one-minute excerpts. Those who shared the shocking films said it was evidence that Ethiopian soldiers had massacred civilians in Debre Abay, a district in central Tigray.

The news site Tghat, run by a group of Tigrayan activists living abroad, reported on January 12 that a massacre had taken place at this location. In early February, the site shared excerpts from the video. In the footsteps of Twitter users who have begun investigating the origins of the video, the British daily The Telegraph published an article on 19 February.

Our team decided to publish only blurred screens of the video due to the extremely violent content.

The pictures show about 30 bodies on the ground on the outskirts of a village.

We examined the location of buildings, paths, and trees in the video, as well as the mountains on the horizon, and compared this with satellite imagery and topographic information available on Google Earth Pro. In this way we were able to determine the exact location where the video was filmed.

It was filmed in a village called Mai Harmaz in the Debre Abay region, which is famous for a famous monastery, located about two kilometers from the village.

In haut, a montage of different captures from the video screen, at the moment where the cameraman is filming in the direction of the village and, at the bottom, a montage showing the moment when he is filming the exit of the village (south-west direction). We see the same elements surrounded by a satellite image captured from the following coordinates: 13.820976, 38.125441. © Google Earth Pro / France 24

Basically, the Montagneux profile is visible in the video in the south-west direction (accented by contrast effect by our editors) and, in high, this is generated by the topographic data in Google Earth Pro. © Google Earth Pro / France 24

Then we mapped the location of each of the bodies on a satellite image. We counted 30 lifeless bodies, all dressed in civilian clothes. There is a large amount of blood on some of the victims, which indicates that they were injured. In some places, the victims have lost so much blood that the ground beneath them has changed from black to black. At least two people, lying down and probably injured, live and react to the cameraman when he films.

Each red dot indicates the location of a corpse visible in the video and two yellow dots indicate which people are still alive at the time of viewing. © Bildsatellit dated 19 February 2021, provided by Planet Labs

“You should have finished the survivors!”

At the beginning of the video you can see two lifeless bodies on a gravel road. The film begins to speak in Amharic, probably to someone who is not visible.

“Hey, you should have finished the survivors!” he says.

According to several Amharic speakers, the man has a strong accent from southern Ethiopia. The Telegraph also reported this information. A boy lying on the ground answers in Tigrinya, the language spoken in the northern region.

Then the cameraman walks towards two men lying on the ground. One, who seems to be young, reacts to the cameraman and they start talking:

The man in the sun is alive and trying to answer the questions of those who film. They do not understand because they speak two different languages, one tigran and the other Amharic. © France 24

Soldier (in Amharic): “Why were you here in the first place?”

Children on the ground (in Tigrinya): “I live here.”

Soldier: “Who brought you here? Did he (dead man lying next to him) do that?”

(Soldier does not speak tigrinya and can not understand the child).

Soldier: “You do not understand Amharic?”

Children on the ground (in Tigrinya): “I live at these homes over there (gestures).”

It is impossible to know if this man is the one with whom the cameraman has just discussed or not. He marches in boitant. © France 24

One minute after this exchange with the young man on the ground, the cameraman films another man who is limping away from the area.

In the background, women and men can be heard pleading in a mixture of Tigrinya and Amharic: “Please, in your mother’s name!”

“Leave it,” the soldier filming finally says. “Let him go. We’ve already met him. He should have been killed in the beginning. Enough, let him go, he survived.”

Several men carrying military fatigue appear throughout the video. They all wear camouflage uniforms and sand-colored boots. Some also wear a hat of the same color. It is not clear if the man filming the video has a uniform, but his conversations with the other soldiers make it look as if he is part of the same group.

Several uniforms and bottoms like these are visible throughout the length of the video. © France 24

To the left, a video capture of a video showing a man taking a long-antenna talkie walkie-talkie and, to the right, the AFP photo of an Ethiopian soldier wearing a same-type camera, released on November 25th 2020. © France 24 / AFP

During the last seconds of the video, you can see a man armed with a rifle. However, the image quality is not strong enough to identify the model.

A zoomed screenshot of the moment in the video where we see a man with a gun. © France 24

After aiming his lens at the bodies of 30 people, the film man ends his video by saying “See how many have been affected. Everything on video.”

However, there are no flags or badges that allow us to identify their battalion. It is not clear if these men are part of the regular army or an affiliated group such as the paramilitary police or a militia.

Several local sources said that Ethiopian soldiers fired on villagers on January 5, 2021, several days before the Ethiopian Christmas celebration was held on January 7. Since there are at least two survivors shown in the video, it is likely that it was filmed the day of the massacre.

We can confirm that this film was taken some time after 2018. This is because a building under construction shown in the video will not be shown in satellite images before that year. The length and orientation of the shadows projected by the men and buildings in the video correspond to a late afternoon in the winter, according to the SunCalc website.

On the left, a video capture of the video where one sees a building under construction and, to the right, a satellite image of the end date dated 2018 on which this building is absent. © Google Earth Pro / France 24

We did not find any instance of this video online before February 2021.

In response to The Telegraph, Ethiopian Ambassador to London Teferi Melesse Desta said the video had been “taken out of context” and that the Ethiopian army “is doing its utmost […] to avoid civilian accidents and to protect citizens’.

Our team requested an interview with both the Ministry of Defense and the Prime Minister of Ethiopia for more information. We will update this page if they respond to our requests.

‘A war without photos’

The recordings from the massacre in Debre Abay have lifted the veil of what the media calls “a war without photos”. Abiy Ahmed’s government prevented journalists and NGOs from entering Tigray for several months to avoid “interference”, while authorities claimed that the international media had not been able to cover the situation due to “land and sea transport disruptions”. The ban was partially lifted in late February for several media outlets, including FRANCE 24. From the beginning of 2021, some images of the war in Tigray have come out, as well as the stories of people on the ground. Many NGOs have been worried about what they hear.

The Secretary-General’s Special Adviser for the Prevention of Genocide announced in early February that she had seen reports of serious human rights violations and violations by the parties involved in the war in the Tigray region and their allies, including extrajudicial killings, sexual violence, looting. property, mass executions and obstructed humanitarian access.

Videos documenting suspected war crimes are increasingly being shared online and are now a major source for international courts, including the International Criminal Court.

“Given their growing use, the institutions are working to standardize how they are collected and investigated,” said Aurélie Aumaître, a lawyer who specializes in crimes against humanity and war crimes at the Paris court. In December 2020, the University of Berkeley published a guide for lawyers who want to use these videos as evidence during a trial, in partnership with the UN.